Turn on/off the embedded sound - The sound embedded in this page comes from the Pulled Muscles CD track 1. Warm up featuring the interactive violin MIDI bow.

For years now composer and improvising musician Jon Rose has been working on a large scale project revolving around his instrument, the violin. His output consists of avariety of alteredviolins for performances and installation pieces, a seemingly endless string of CDs and two books. In concert he shifts from character to character at the stroke of his bow, that has a specially designed electronic controller built into it. These characters are also the protagonists of The Pink Violin and Violin Music in the Age of Shopping. They all belong to the huge Rosenberg family, a dynasty of Australian violin virtuosos. There is a Dr.Johannes Rosenberg, a Jo 'Doc' Rosenberg, a Jimmi Rosenberg. The first represents serious academic composition, the others jazz and speed metal (allegedly C&W singer, turned new wave hero) respectively. Behind these musical giants there is a whole army of relatives, not to forget a hint of a parallel family -- same names, but entirely different people.

The Mozart Industry/Saint Johanna (1991) are two 'real violin stories', studies that already deal with themes to be explored in more depth in Rose's more recent brainchildren. They are narratives in the shape of radio plays. One pokes serious fun at the marketing hype around Mozart five years ago, the latter is a Joan of Arc spoof legend of a violin playing woman who led the French into a battle of soccer football against the English and defeated the latter by a frantic charge in the nude. On the back cover of the CD credit is given to string ensemble Les Boyaux Anciens de Poitiers, directed by Docteur J. Rosenberg.

Pulled Muscles and The Virtual Violin run parallel to The Pink Violin. Pulled Muscles is an exercise that brings together two extremes in contemporary culture -- sport and music. Part of this CD is devoted to a reconstruction of events in the 1936 Olympic Games in Berlin, in which Johannes Rosenberg is supposed to have participated. Apart from being selected to run the 10,000 metres he contributed The Athletic Violin (included on the CD), a composition written for the violin and sport sounds. Although it was turned down by the Germans, Rosenberg further explored this combination later on in works like The Walking Bass and 4 Kilometres; 33 Metres. Moves and Games features sound samples of bodily functions and Olympic sports with commentary added ("Nobody really knows who invented the ball. Perhaps it was the person who came up with the wheel -- he liked the rolling thing"). The Virtual Violin is a showcase of the interactive controller technology developed at STEIM in Amsterdam. As the notes say, "the real sounding violin is mostly real & played by Jon Rose." Les Boyaux Anciens make their appearance here as the Orchestra of Ancient Guts. The central piece is again a radio play adapted from The Pink Violin. This time part of the narrative focuses on the re-enactment of the moment when Rosenberg discovered the Unified Music Relativity Theory which proves and regulates the interconnectedness of human history andcontemporary life with violin music. The original occasion was a failed kamikaze dive by the maestro ona US Aircraft Carrier in the 1940s; the re-enactment has an airliner, passengers and all, plunging into the Sydney Opera House. In Rose's soundplays the eccentric narrative and the music are closely linked. He is as talented a storyteller as he is a skilled violinist. There is something so effortless about his playing and his shifting from one style to the next, that sometimes you hardly notice he isthere with his instrument. The two books take different angles on the violin and its place in the world.The first looks at it from the point of view of the aforementioned Rosenberg dynasty, spiralling towards and away from Johannes's Unified Music Relativity Theory which indiscriminately warps history, musicand minds, fragments these and glues them together.

In Violin Music in the Age of Shopping the theory has taken a definitive shape and is turned to profitable use. Sales executives have taken over the world and all effort is aimed at selling, getting buyers in the right mood to purchase -- a tepid and flaccid kind of ecstasy brought about by the acquisition of goods, however trivial. This state of sheepish perpetual bliss is mirrored and induced by vapid tunes playedincessantly on industrial (and probably, virtual) violins. The books are thick with satire. That is the thread running through both of them; but although it might be possible to construct a chronology out of the narrative, the setup is too fragmented and chaotic to discover anything even remotely indicative of a plot. Mind you, this is not a point of criticism. The form gives the authors (there are several of them, besides Jon Rose) free play; it lends the books a hearty anarchistic flavour. What's more, these books embody postmodernism bent over backwards and choking on its own fumes. Two humorous buoys bobbing up and down on a drab sea -- that currently sees the tide of inflated consumerism coming in unremittingly whereas the tide of content seems to be at a chronic all time low. To be sure, I never saw postmodernism applied with such comic effect, nor so effectively satirized. Violin Music... comes with Rosenberg's revised timetables. Spanning one century these testify to the rise of the phenomenon of Shopping. Apart from historical data of international significance, violin related facts ("1903 - The German climber and explorer Hans Meyer discovers the violin playing Indians of Chimborazo, Ecuador. He knows a business opportunity when he sees one and sells them a bunch of violin bows to go hunting with."), you'll find lots of noteworthy entries on shopping, boxing and activities of Italian anarchists world wide. More recent developments concerning Rosenbergs, violinology and the welfare of commerce can be traced on Brainweather, Eine Violine fur Valentin and Tatakiuri. The first takes the listener to a domain that is at once heaven, hell and purgatory. The story takes off in a dentist's chair where the mind of a dynasty member starts wandering as a tooth is extracted. Whilst multitudes of Rosenbergs celebrate a reunion and clamouring chaos, a judge calls out for order and Robert Zimmerman Rosenberg is looking for a way out of there. As brains, body parts, thoughts and musical styles are transplanted, exchanged, bartered -- Australia changes into one large golf course where violinists do their utmost to bring players in the right mind to putt their balls, and another Rosenberg moves from physical into digital existence. It's all in the mind, you see. The Weather Man shows Rose in fine form playing virtual duets with a synthesizer triggered by his bowing.

Karl Valentin is an interbellum violin playing monstrosity in Rose's personal pandemonium. His thought processes and the musical style of his time have been captured in gruesome detail in productions for broadcasting services in the South German state Bavaria and in Austria.

Tatakiuri represents trips to shopping afterlife. Accompanied by turntable magician Otomo Yoshihide, Rose visits China and Japan, two countries that leave the West pathetically far behind as it comes to consumer potential. A persistent door to door salesman runs as a red thread through this CD, knocking on Rose's door and asking for attention in a whining voice, whilst the master of the house is playing his instrument and doing the dishes. On these three CDs the musical content is rather more central than on the others. Rose still acts as a master shredder and tacker, but the music does more than support a narrative. On Eine Violine... it evokes the murky atmosphere of German coffee houses between the wars, where people tried to escape from everyday misery while Nazism was on the rise. Tatakiuri inspects mainly what's crawling under and on Japan's musical surface -- there's hardcore, classical instruments and snatches of shopping mall sedation. It's a mixed bag, and it's been mixed with devilish glee. There may be those who are not partial to all this blatant irreverence, and hold that Rose had better not lose himself in these pranks. I concede that whether you like it is a matter of taste, but regardless of that it was about time that somebody brewed a potent antidote for the pomposity running through the veins of contemporary music and of those who are feeding upon it.

What is more, I will not easily forget how Jon Rose was about to play in a concert organised by Het Apollohuis to celebrate Phill Niblock's 60th birthday in a church in Eindhoven. He could not use his appliances because a fuse had blown, and therefore was not able to play what he had prepared. Promptly adapting himself to the circumstances he improvised a wonderful acoustic piece. Obviously Jon Rose does not hide behind technology, he doesn't need to. He uses it because it is his choice to do so. With or without it he is a superb musician. 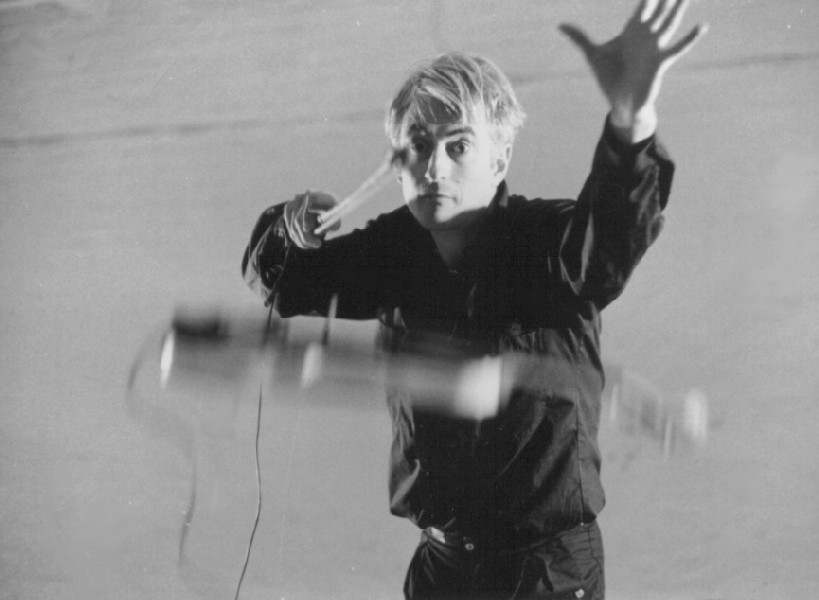 The Chaotic Violin, live at The Hebbel theatre, Berlin - 1990
website by jos berkers