A VIOLIN WITH A HORN

In 1902, three years after it's invention, a very enthusiastic article about the Stroh Violin appeared in the Strand Magazine by D. Donovan who wrote: 'Much has been written about what is termed the 'reserve' force of a Joseph Guarnerius. As a matter of fact a Stroh Violin has the reserve power of three Josephs, and is as loud as four ordinary violins. The G string is a dream. It possesses the deep rich quality of a fine cello A, but there is no unevenness in the strings. The harmonics are loud and pure, and what is of great importance is an entire absence of scrape... And it will, I venture to predict, in spite of prejudice, ultimately be recognised not only as a triumph of creative skill, but as worthy of taking its place with those instruments which depend for their effect upon attuned strings'. Well he was wrong about most of that.

'The vibrations of the strings are conducted by means of an ordinary violin bridge, which rests upon a rocking lever, to the diaphragm and resonator. The lever supporting the bridge oscillates laterally upon the body of the instrument, the end being attached to a diaphragm of aluminum, by a small connecting link. The diaphragm is held in position between two India rubber cushions by means of a specially designed holder fixed upon the body of the violin by two brackets: attached to this holder is the trumpet or resonator. The body or main support of the instrument is in no way employed for sound purposes: it simply holds the various parts of the violin together, and sustains the enormous pressure of the strings when tuned. The disc or diaphragm is perfectly free to vibrate, the result being that when the strings are set in motion by the bow the bridge and rocking lever vibrate accordingly, and thus every vibration is transmitted to the diaphragm. The diaphragm sets in motion the air contained in the resonator, the resonator augmenting and distributing the same to the surrounding atmosphere. The rich, mellow tones supposed to come only after at least a century's playing of a violin requires no forcing. The slightest contact of the bow will bring them forth and make the player imagine himself a far better performer than he really is'.
A Musical Opinion and Music Trade Review, February 1902, 'The Stroh Violin' p.356.

The Stroh has all but disappeared from use in the century that followed its invention. It disappeared along with the age of novelty, and music hall, and the early techniques of mechanical recording, for which it was primarily invented. Up until the 1920's, which saw the advent of electrical recording, all sounds had to be directed at a large horn. Stringed instruments were particularly difficult to record then, their sounds being insufficiently directional. However we live in a post modern age when all recorded sound histories are available, and so the Stroh has re-taken its place as an idiosyncratic acoustic phenomenon.

It is no coincidence that Stroh had also built the first gramophone to be demonstrated in Britain, for the idea of his new instrument originated from the gramophone's sound-box (he also produced an improved version of Edison's phonograph in 1878). Stroh patented the instrument in 1899, significant improvements being made in 1901 when he patented an aluminium diaphragm for it as well as for phonographs and 'analogous sound producing, recording or transmitting contrivances'.

An important feature added soon after its invention was a small horn attached to the larger horn or to the diaphragm housing, so that the violinist himself might hear himself better when playing with louder brass instruments - possibly the first monitors in the history of amplified music. Stroh instruments - horned violas, cellos, mandolins, guitars and the ukulele too - were manufactured in London by his son Charles from 1904 -1942.

Although first used for recording purposes, Stroh violins became common in the 1920s and 30s among pier bands and dance orchestras as 'a last valiant effort to prevent the saxophone from usurping from the fiddle the position as leader of the general dance' (J. Pilling). They also were in use throughout Europe by street and folk musicians including those in England who play for Morris dancing and who have affectionately nicknamed the Stroh violin the 'pornograph'.

The KRYONICS are a former Berlin based improvising string trio who feature horned instruments: an original Stroh violin; a Stroh 'Japanese' One-String Fiddle, and a Violinofó or Vioara Cu Goarna, made in Romania by peasant folk musicians from the Bihar region of Transylvania (it's called a Highèghe if you are Hungarian). Its sound is not up to the volume of the Stroh but it has a unique grainy quality, closer to the sound of a small transistor radio than a violin.

As to the 'fake' Stroh (courtesy of the Rosenberg Museum) shown in the photos. The fake looks like a Stroh and sounds almost like a Stroh, but the instrument originates from a 'small and undistinguished hut' on the border between Thailand and Myanmar, is available in brass or aluminium, and further details must remain sketchy owing to the hegemonic and exploitative character of the global economy. 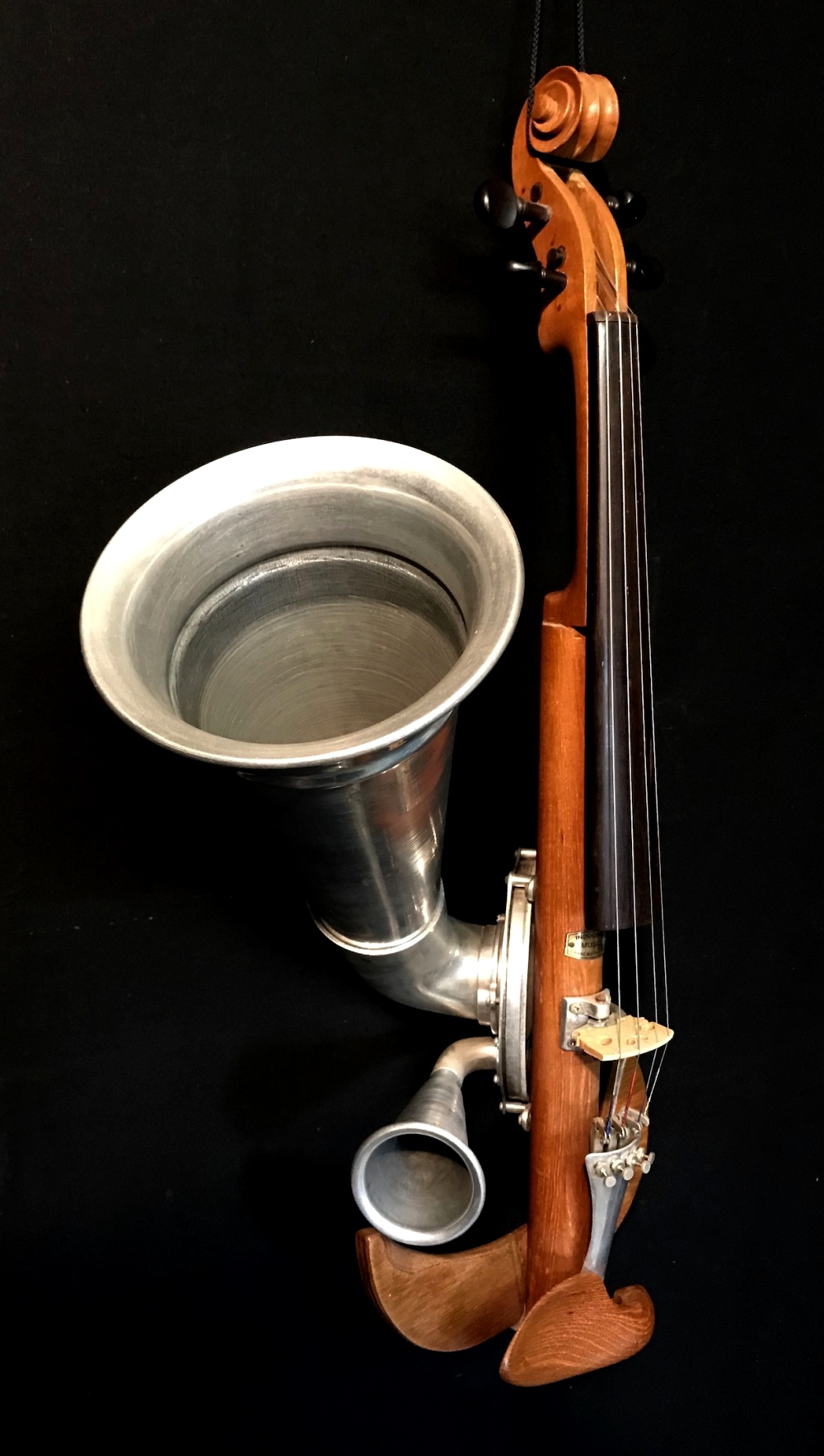 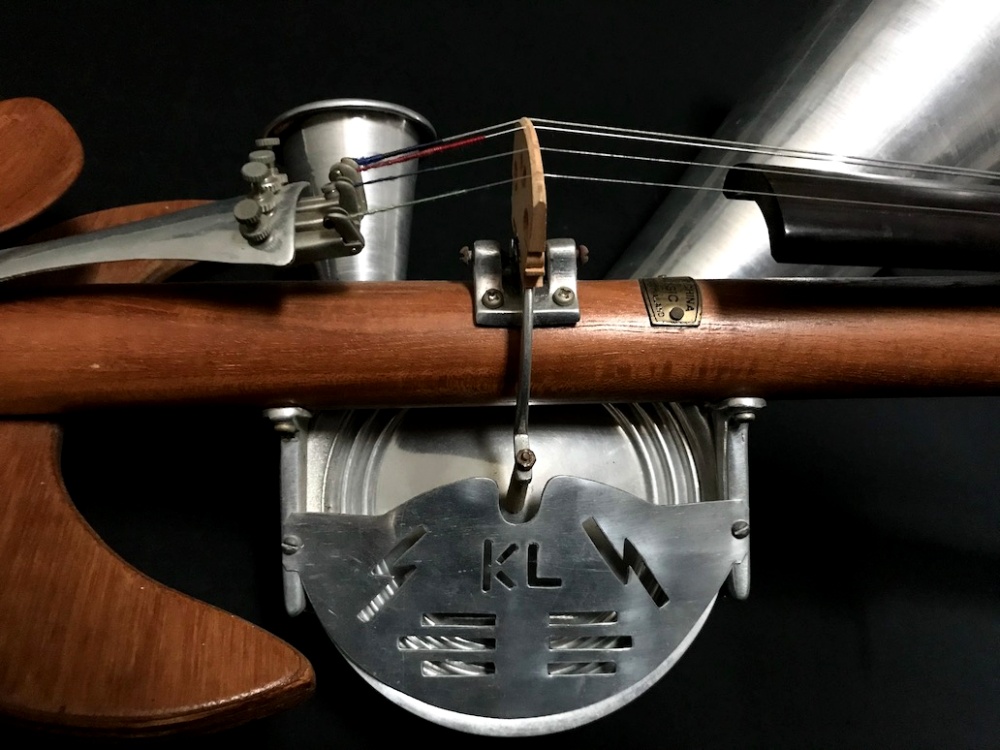 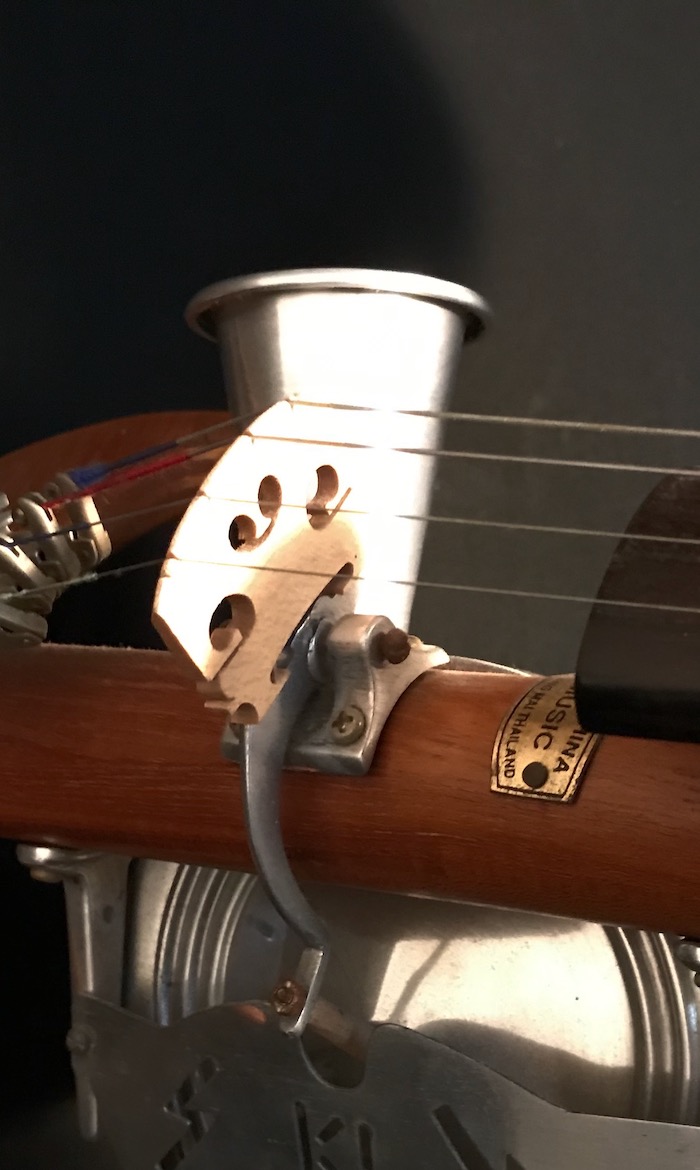 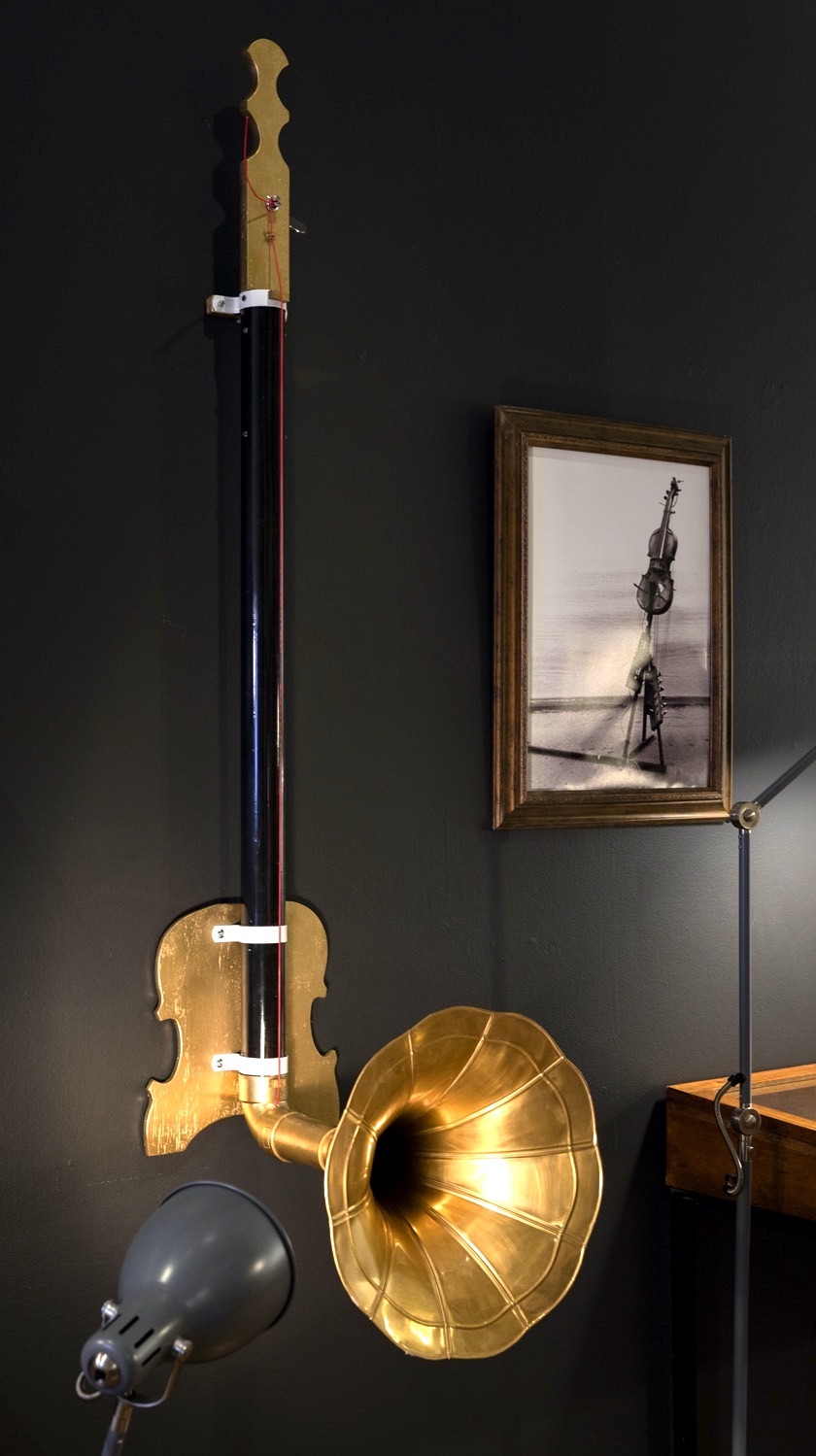 the 'One String Golden Horn', made from brass horn and PVC pipe, Rosenberg Museum 2015
website by jos berkers