Turn on/off the embedded sound - extract from the rehearsal of Elastic Band prior to performance, recorded on a simple handheld device, 8/3/2014.

A project from Jon Rose, Elena Kats-Chernin,
and Ilan Volkov.
Commissioned by The Adelaide Festival 2014

Elastic Band brings together musical processes which are normally considered separate or at least at opposite ends of the musical continuum. The word 'improvisation' may recently have become an all-purpose buzzword, but composition and improvisation are modus operandi which have historically been kept in their cultural boxes. These methods require a different set of skills and, above all, much time spent in the practice of the doing. In the second half of the 20th century, the development and use of graphic scores, indeterminancy, and chance procedures, opened some doors for a co-existence but shut others; composition and improvisation have largely kept to themselves over the last 40 years.

Figures like John Cage actually opposed the notion of improvisation, others like George Lewis have brought the practice into the more respected focus of academia. Despite a recent plethora of books on improvisation, what it means and how to do it, the practice of this aural tradition remains untrustworthy if not suspect from the position of the written score with its determined and fixed parameters.

Elastic Band is an attempt at a dialogue between these two forms. What is proposed is a sonic continuum between experts in their field; a composer (Elena Kats Chernin), an improvising musician (Jon Rose), and a conductor (Ilan Volkov). The audience may like to consider themselves to be witnesses or observers to a process between trusting friends and colleagues rather than consumers of a set piece product, an event that reveals the workings of a symphony orchestra, a written score made flexible, an improvising soloist, and a conductor creating in the moment - and yes it is risky.

Video from the Bologna Concert of Elastic Band is available.

Composers mostly work alone and function as autonomous beings. The idea of a straight out collaboration is not the norm. If you see musical process as some kind of continuum, then observers would probably place Jon and me at different ends of the spectrum. He has a reputation for free improvisation; I have a career as a composer of "pieces". How could such a collaboration happen?

Composition can be a process of ever diminishing possibilities. As each passing draft appears more and more options are excluded and wittled down to definitive decisions until a final product has reached its leanest form - subject to interpretation. Choices are made and the result is to be considered as set in stone - fixed and finished. Despite the aleatoric experiments of some composers in the 1950s and 60s, this is still primarily the way it is and what is expected of composition. Composition is hard ask to define but for me I'd put it like this - the notated score is only a first try in a world of possibilities.

The first thing that happened as we started out on this process; Jon sent me a transcription of an improvisation that he had just played and suggested that I use any fragment from any part of it as a starting point - to get us going. One of those phrases became a bass groove in movement 2 - Trees on The Move.

We also improvised together in my studio. It was a liberating experience for me as I love to improvise on the piano and it was mind-blowing to hear Jon's acrobatics on the violin and for me to react to what he was doing, he was also reacting to the materials that I was playing, like keys, rhythms, etc. As we played, there was a lot of laughter. Sometimes Jon would say things like 'No dominant tonic sequences, please! No melody, please!' We used fragments from the transcription and worked our way around them. Narrative material was out. More glimpses than a panoramic view.

Then, once most of the score was in its second draft, Jon surprised me by suggesting a melody in the violins after all; you can hear it at the end of movement 3 - What the Hole is Going On? "That Russian thing" as he put it! This un-dogmatic approach is very attractive to me, as nothing is quite settled and nothing is final. Both Jon and I have the minds of immigrants, in that we both think nothing is quite certain; a course of action is determined and then suddenly you find yourself pointing in the opposite direction.

Sometimes, just when I thought a movement was done, Jon would say 'I have another idea!' And it is really amazing to see what goes on in his head. Sometimes I'd say 'This is going to be impossible to explain to the whole orchestra - who plays what and when'. I am now so used to my compositional method in prescribing each note for each bar and instrument that this kind of intentional flexibility was scary. Even though I have worked with improvisational sections in theatre music, it was always on a much smaller scale and with time at my disposal to trial and error the results before public performance. Orchestras are a large and expensive operation and there was a lot here being left on the trust of Jon and Ilan.

At times we would both blurt out simultaneously 'Well, that's a No Show'. How to keep the material malleable, express my own character, and create a satisfying convergence of personalities? I was insistent that each movement should have its own character even if Jon just kept playing between movements (he warned!) I remember a point where it suddenly seemed appropriate to have a traditional chord progression, to my amazement, Jon agreed and there is a real sequence towards the end of movement 5 - A is for Eh.

Some pitch material in Elastic Band came from Jon and some from me, and it is hard to tell now who did what, where and when. In the performance of course, it may happen that some materials wont even get a hearing and some will be way longer than we had anticipated. Such is the nature of the flexibility we have built into this musical dialogue.

The movement 6 - Fugues A Go Go is designed like a pseudo-fugue. The material was born out of a desire to get the orchestra to play with the same speed and velocity as Jon. So for this section we went back to the original improvisation material that Jon had sent me, and I picked out a few bars out of the 12 pages of hundreds of bars that he had in one sitting improvised and directly sent me. Then I added my own amendments.

As a student of Helmut Lachenmann in the 1980's, extended techniques and serialism were my daily diet. Over the following decades I moved slowly away from this regime and my vocabulary expanded to include throwbacks to older styles as well as my own experiences with cabaret, theater, pop culture and my Russian heritage. Working with Jon has been something of a meeting with the young Elena of the 80s. She remains with me still, but she doesn't usually get to go out much! 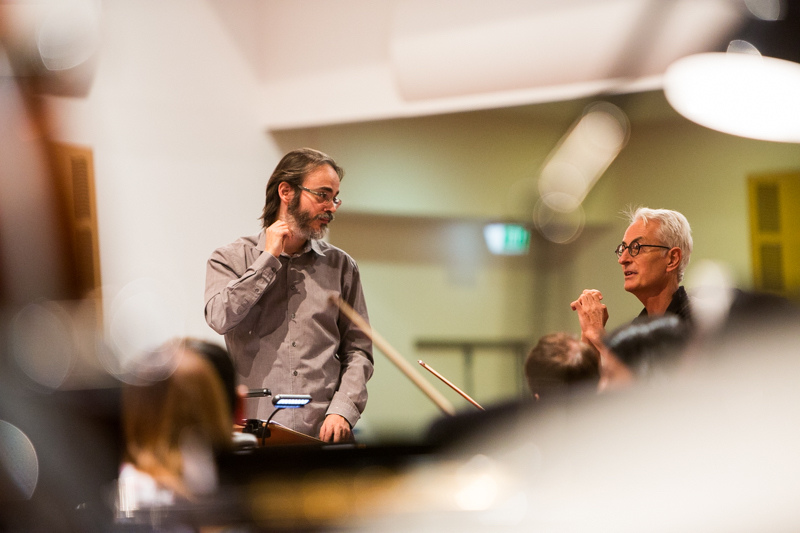 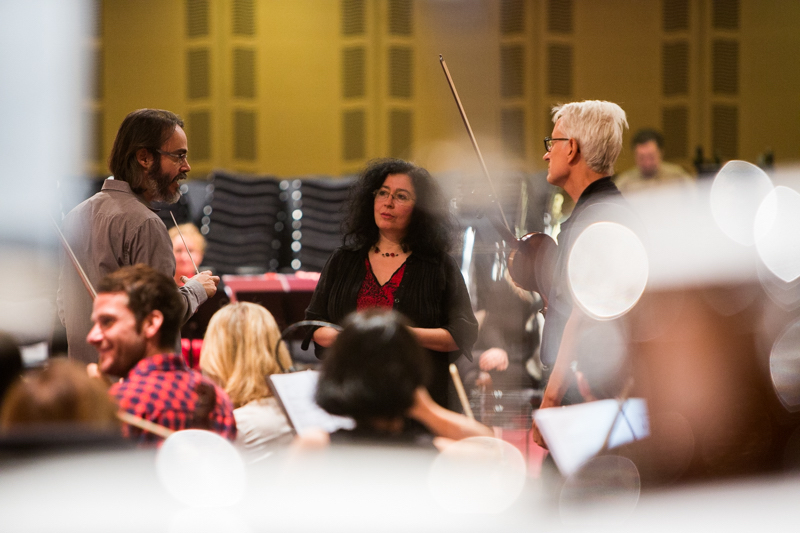 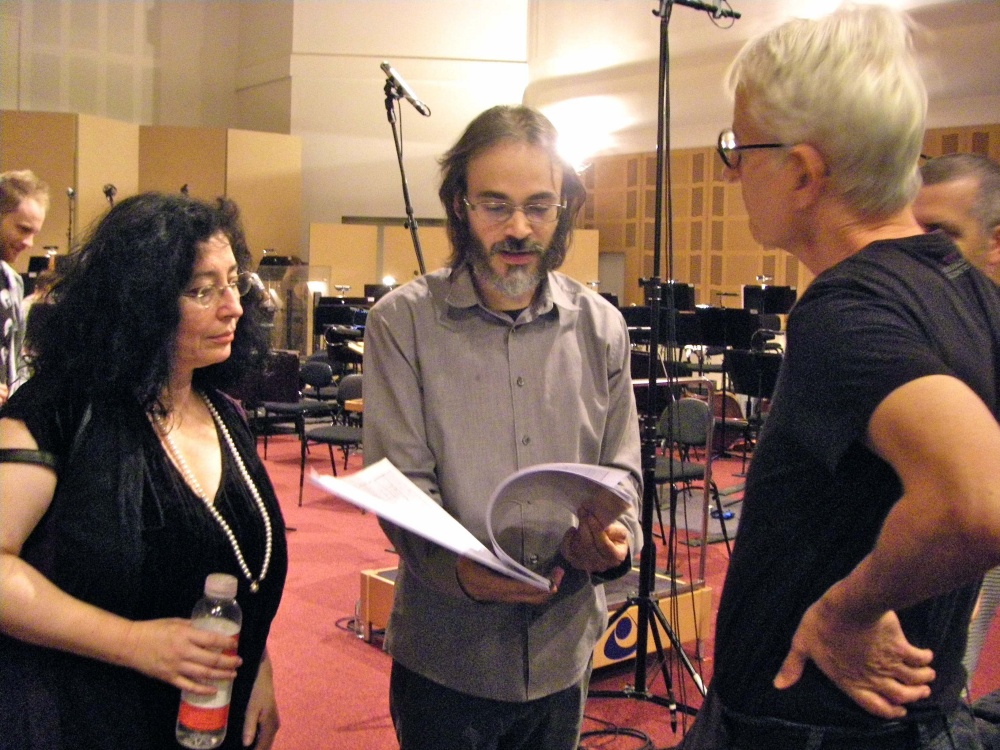 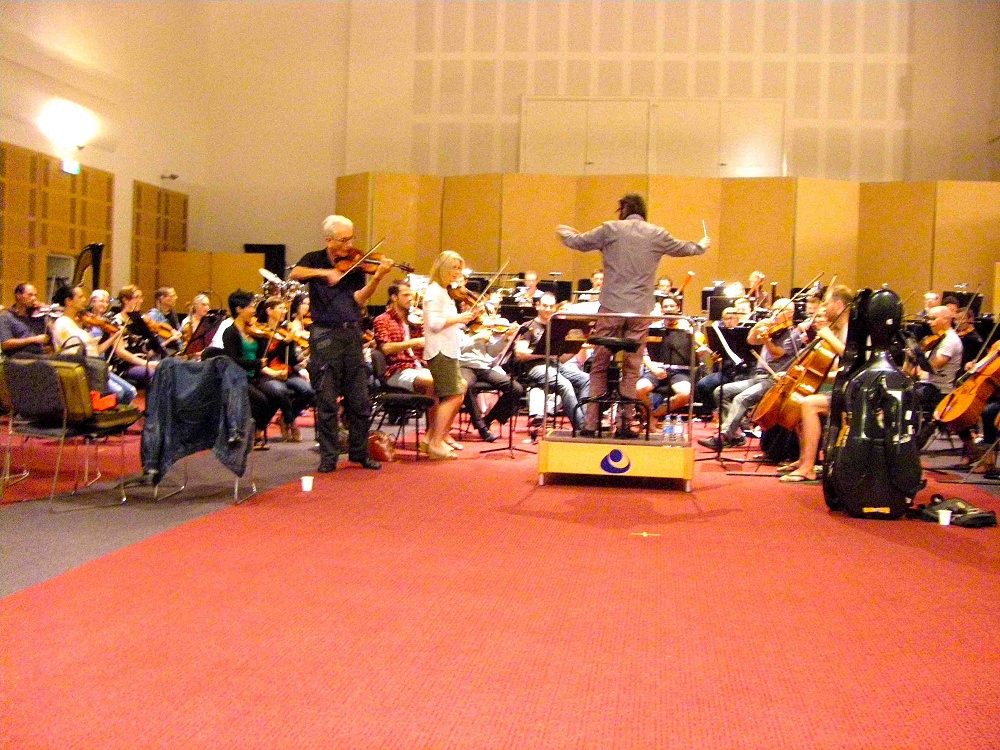 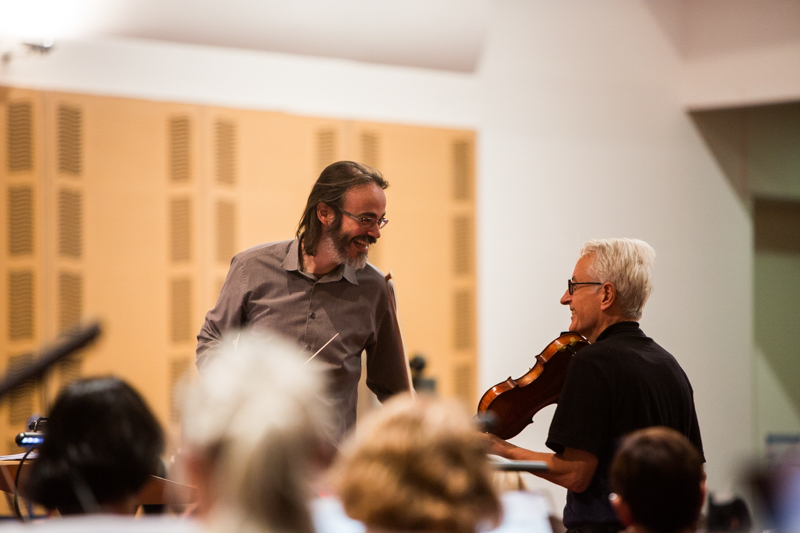 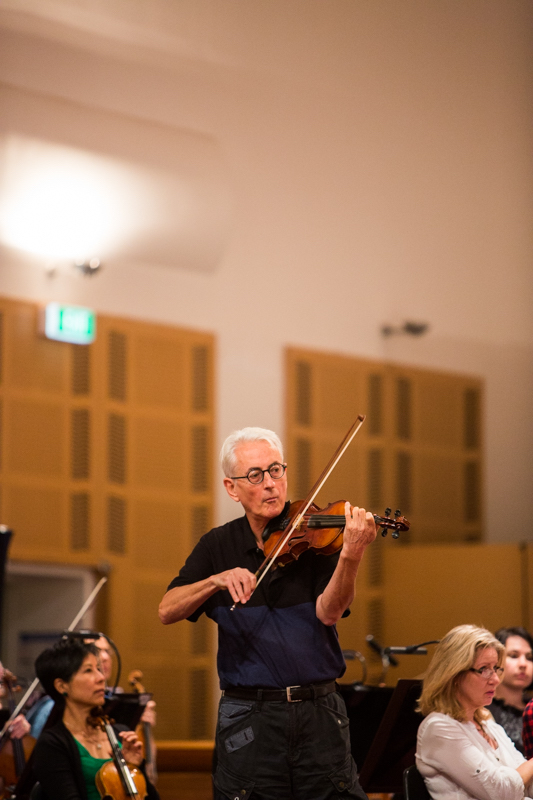 At the rehearsal of Elastic Band, Adelaide, 2014
website by jos berkers