Turn on/off the embedded sound - The sound embedded in this page features Bus Boyk, last of the cowboy fiddlers.

last of the cowboy fiddlers

"I consider him a treasure and feel he must be numbered among the finest living exponents of the violin styles called western swing, western, old time and country."

As a young violinist, Bus Boyk embraced improvisation. "Anybody who reads can play lots of notes. If you want something special, it has to come from inside," he reflects.

Born in Everett, Washington in 1917 as Norval Boyk, "Bus" began studying classical violin at age seven. Now at 85, he is one of the last of the great cowboy fiddlers. Music has been his sole means of support--and his career reads like several chapters of American popular culture.

In the 1930s he performed with the Cascade Hillbillies and the Rancho Serenaders. During World War II he played a USO tour of England, Iceland, and Labrador. After the war, Boyk played the major vaudeville theaters, including New York, Washington, DC, and Miami, with the Yeary Brothers and the Rhythm Rangers. Next came three years of a daily half-hour live radio show with Roy Jackson and the Northwesterners.

Boyk honed his economic, precision style of playing during his 11-year (1953-1964) association with the Sons of the Golden West. This quartet toured its cowboy-comedy act throughout the United States, including the Nevada circuit (at Las Vegas' The Golden Nugget downtown and The Riviera Hotel on the strip) and summers in Jackson Hole, Wyoming, at the famous Wort Hotel. They rubbed shoulders with many of the famous acts of their day, including the Sons of the Pioneers, Bob Wills and His Texas Playboys, and even a teenage Wayne Newton, who in 1955 Boyk taught to fiddle the show tunes "Orange Blossom Special" and "Ragtime Annie." Later, cowboy singer Jimmy Wakeley produced one LP and about ten 45s for the Sons of the Golden West at his Hollywood studio.

After the Sons split up, and as America's musical tastes changed in the '60s and '70s, Boyk was determined to do whatever it took to continue in his chosen field. He often had to go back on the road, leaving his family behind in Portland, Oregon.

Sometimes touring meant several months at a lonely roadhouse. Other times the road led him to coliseums and dance halls. He performed in California with Glen Campbell, saw national tours (including Churchill Downs, Kentucky; the Huntsville Prison Rodeo, and Governor Connolly's Ranch for President Johnson). As a member of Ray Price's band; Boyk recorded at Columbia Records in New York City. Jazz pianist Hank Jones was also on that session and made a lasting impression on Bus. "In Ray's band, all the guys liked to play swing jazz on their off hours," remembers Bus.

Back home in Portland in the '80s, Boyk found himself retirement age but not retirement material. He kept busy in a variety of bands and styles, including country, swing, western swing, old time, and bluegrass. (Once while giving Bus the particulars of an upcoming gig, I reminded him to "dress western." "Not country?" he asked. I stood corrected, and educated. Western means jeans and a cowboy shirt, while Country implies a much more serious look at one's threads, not a la Elvis or Liberace but giving a nod in that direction. Bus still fits into his closetful of finely-tailored Nuti cowboy suits, made in Vegas for the special needs of entertainers.)

In 1985 he recorded in Lake Tahoe, Nevada with Buddy Spicher and Zen Crook. He has continued to give inspired performances, winning the 1992 Grand Champion title at the annual Old-Time Fiddle Contest in Lincoln City, Oregon, First Place in the Senior Senior Division at the 1999 Oregon Old Time Fiddler's Contest, and Fifth Place in the 1999 National Old Time Fiddler's Contest in Weiser, Idaho.

In 1995 he was inducted into the Western Swing Society's Pioneers of Western Swing Hall of Fame. In 1997 the Regional Arts and Culture Council sponsored six Western Swing Fiddle Workshops focusing on Bus. Still an active and sought-after performer with subsequent generations of musicians, Bus has been heard with Everything's Jake, Ranch Dressing, Fiddle Summit, The Pudding River Boys, the Hollis Taylor Band, and as a featured artist with the Oregon Folklore Program. He has been featured in both Strings and Fiddler Magazines.

Playing concerts, Boyk is a fountain of musical ideas, but he has not developed his "bag of tricks" merely by logging hours on the bandstand. Recordings line his studio walls, and he is an avid listener. "I feel it is just as important to listen a lot as it is to practice and play a lot. I immerse myself to the point that I almost think I am actually playing. I've been listening all day today," Boyk said when we spoke recently.

'The Cowboy Fiddle of Bus Boyk', a book/CD set on this fiddling legend's life and music. Transcriptions and analysis of Bus' solos and vocal backup on cowboy, country, swing, western swing, and hot fiddle styles with accompanying historic recordings appearing on CD for the first time; several triple-fiddle arrangements inspired by Bus' playing; and anecdotes from his life on the road. 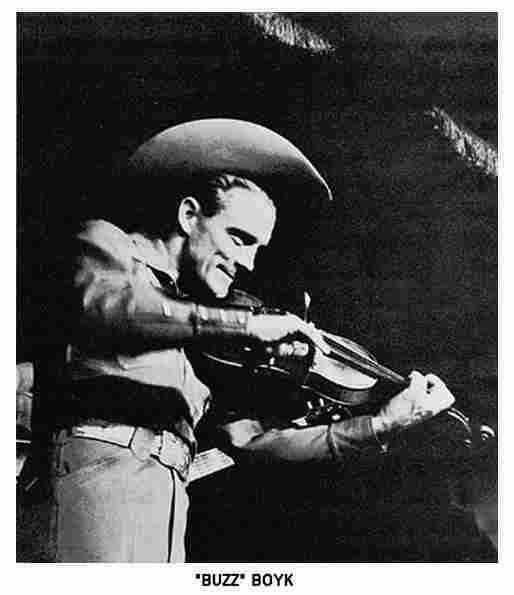 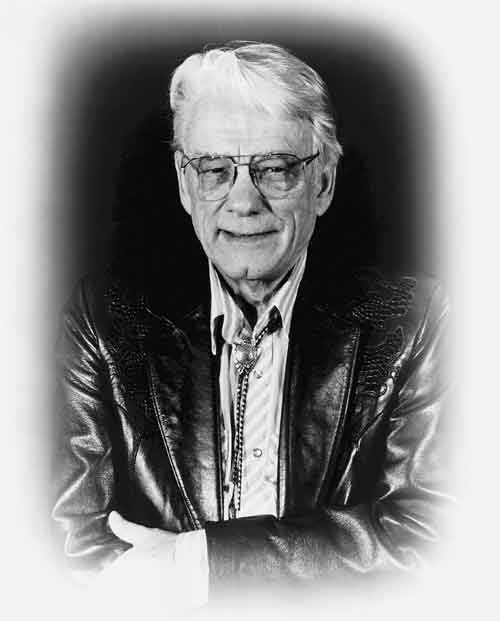 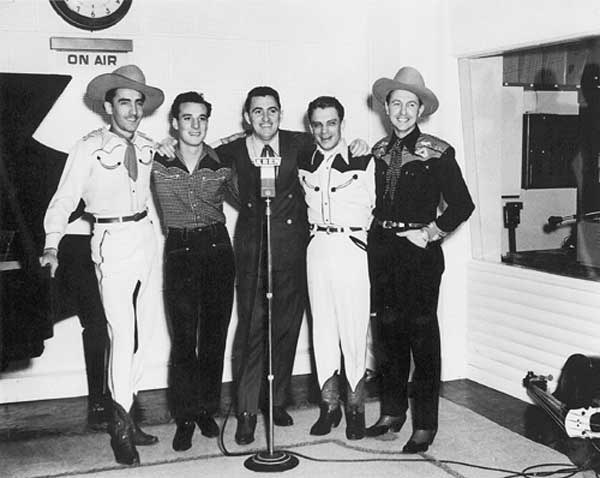 Cal Shrum and the Rhythm Rangers in the 1940s 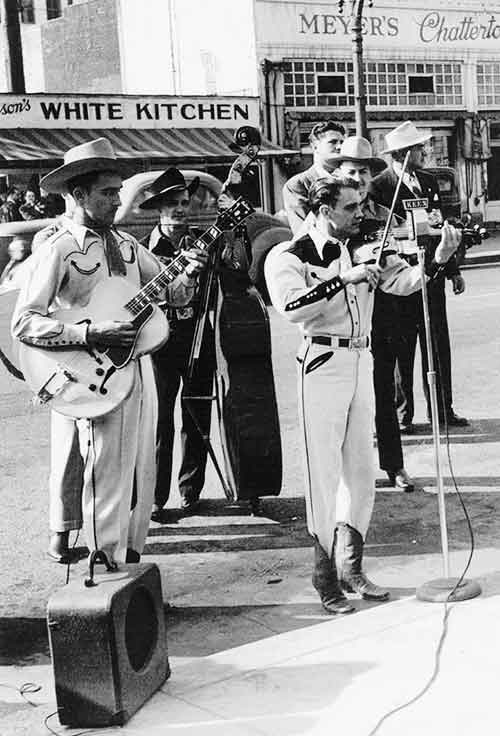 Cal Shrum and the Rhythm Rangers in the 1930s 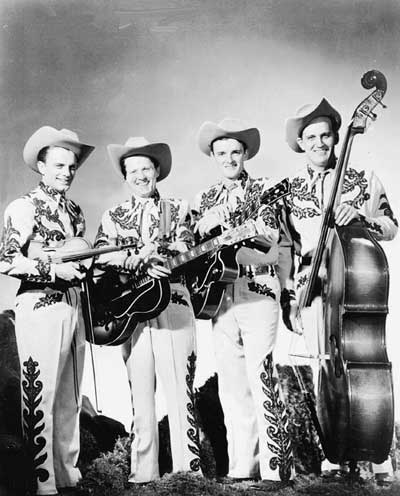 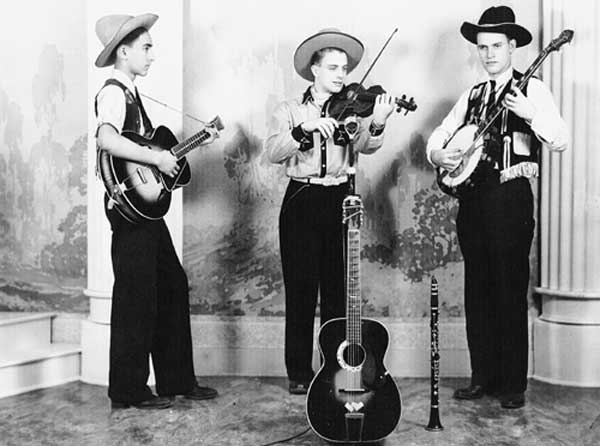 the Young Rhythm Rangers in the 1940s
website by jos berkers