Night Songs is an interspecies engagement between the ancient music of a uniquely Australian songbird - Cracticus nigrogularis (the Pied Butcherbird) and contemporary human musicians.

Night Songs is a compression of geography and time; the recordings and transcriptions of the birds by Dr Hollis Taylor come from Centralia, Western Australia, and Far North Queensland. Pied Butcherbirds sing their long form songs at night in spring, and this performance shrinks a twelve-hour period into a one-hour concentrated audio-visual encounter. Jon Rose has arranged this music for eight human musicians featuring Australia’s premiere new music group, Ensemble Offspring under the direction of Claire Edwardes.

Athough there is video (recording a black-hooded bird at night is extremely problematic!), the performance of Night Songs exists to privilege the aural over the visual.

Night Songs is a development of Whistling in the Dark - a set of duos between avian and human musicians.

The short ABC documentary on Night Songs can be viewed at Art Works, Series 2, Episode 36.

The program notes can be downloaded here.

A PDF of the score to Trephina (which starts at 11'01" in the sound file under the banner at the top of the page) can be found here. The songs of four birds (within hearing distance) can be heard in counterpoint over a ground bass.

Promotion video 4'30"of a live performance can be referenced here. 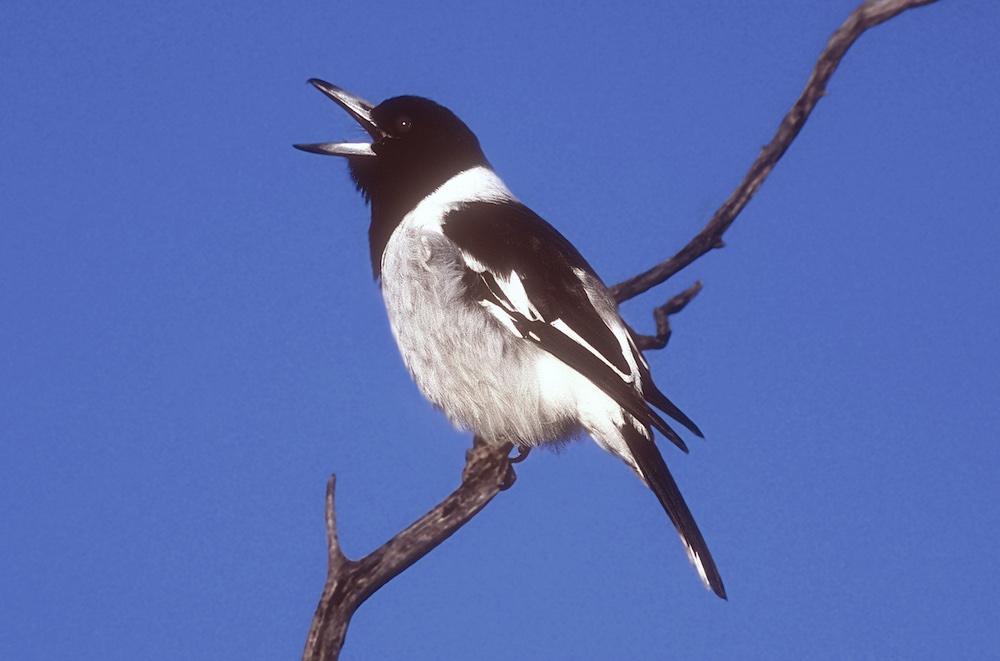 Thirteen million years ago, Pied Butcherbirds separated from the common Corvid ancestor and evolved a preference for song. It is reasonable to assume they have been creating music throughout that time (indeed, it is 250 million years since birds and mammals shared a common ancestor). The ancient lineage of the butcherbird reminds us that humans are new on the block with regard to the invention and perception of melody. And when rock stars ‘own the stage’ and singer-songwriters churn out yet another groan of unrequited love, we know where the precedent can be found. Most of us, however, perceive music as having more strings to its bow than just two functions. The birds know when they have a good tune, as they repeat it; they also know how to show off their technique with counter-melodies and combinatorial variations. This appears to exceed biological requirements, although scientists typically insist that birdsong be kept in the confines of competition for territory and mates (both male and female butcherbirds sing).

As with all diligent musicians, pied butcherbirds practice - the aesthetics of improvement. Out bush, Hollis has witnessed what can only be described as a ‘music lesson’ in which a juvenile is taught old style, in your face, carrot and stick, the grounding and learning of song elements. However, unlike a simple call and response routine, evidence so far suggests that memorization and production by a nai¨ve bird are not simultaneous: the long-term storage of song phrases precedes their first vocal rehearsal by months.

In spring and in their habitat (both urban and rural), each bird performs their long songs of two to seven hours in duration. The songs transform annually with new variations and motives. Night Songs explores the relationships that exist between avian and human music - and music I believe it is (read Hollis Taylor’s book Is Birdsong Music? to refer to the arguments for and against). The birds are nonmigratory; Hollis names them after the street or place over which they sing. Other creatures like Cicadas and Frogs (that are even older than these feathered dinosaurs) and a rare rain storm in Alice Springs also share our soundscape tonight.

In some of our sonic vignettes, human musicians play a detailed transcription (usually simplified) of the birdsong, or complement the recorded birdsong with various sonic strategies such as melodic inversion, augmentation (slowing down of rhythm), transposition, and counterpoint. Often, the original bird recording is heard in its pure state. Sometimes the bird’s song is substituted with an instrumental voice; thus, the original is transformed through the sonic constructs of instrument and instrumental technique into another kind of musical expression altogether.

In general, however, in working with the songs of Pied Butcherbirds, we set ourselves the task of meticulously taking on the sonic constructs of another species. With imagination, we endeavour to either 'be bird' or consider 'what if bird could’.

Our challenge to perform the music of this bird has met with considerable enthusiasm. It might be the time we find ourselves in, with the collapse of biodiversity, global warming, devastating fires, and a pandemic that has our measure. Human exceptionalism struggles under examination. Drought also pushes the pied butcherbird into a closer symbiotic relationship with our species...and so this music too may run out of time.

Night Songs lasts approximately one hour and can be divided up into a time line with 13 linked sections. A short cut up version can be heard under the banner at the top of the page. 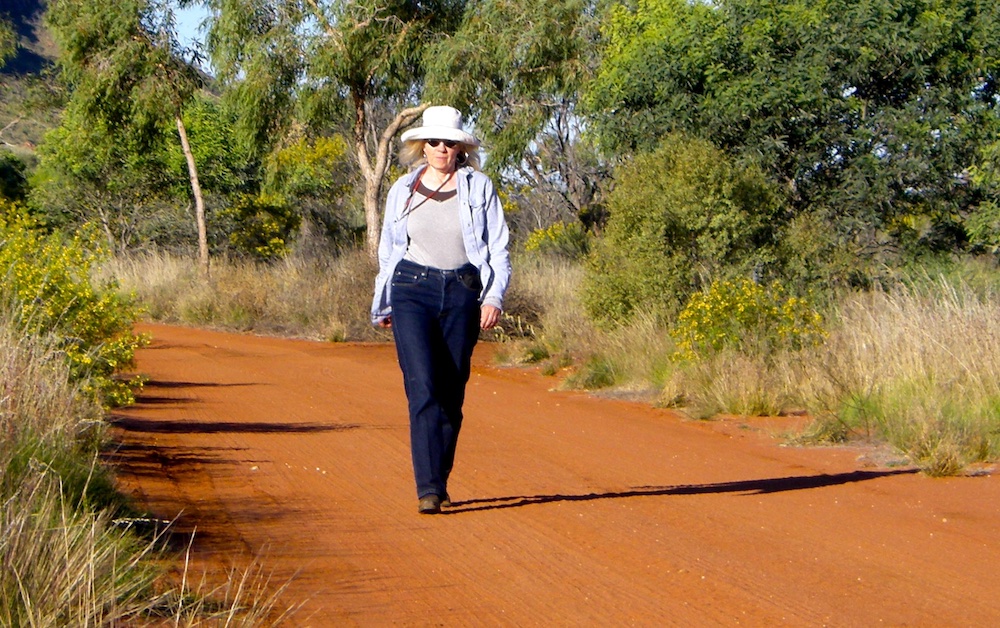 Whistling in the Dark is supported by the NSW Government through Create NSW. 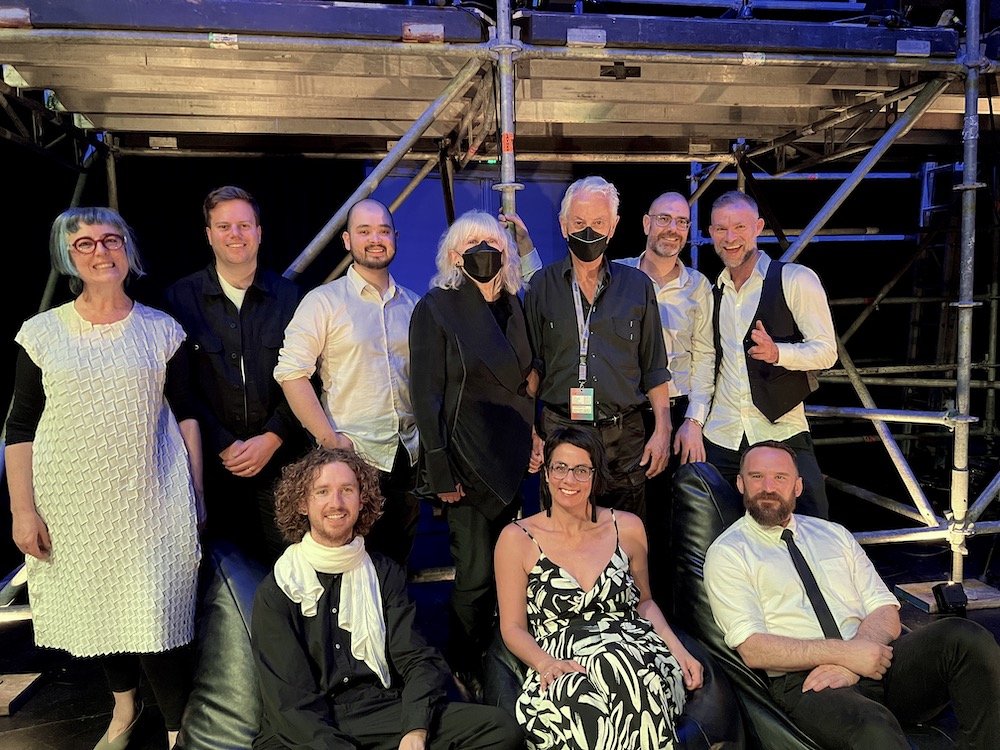 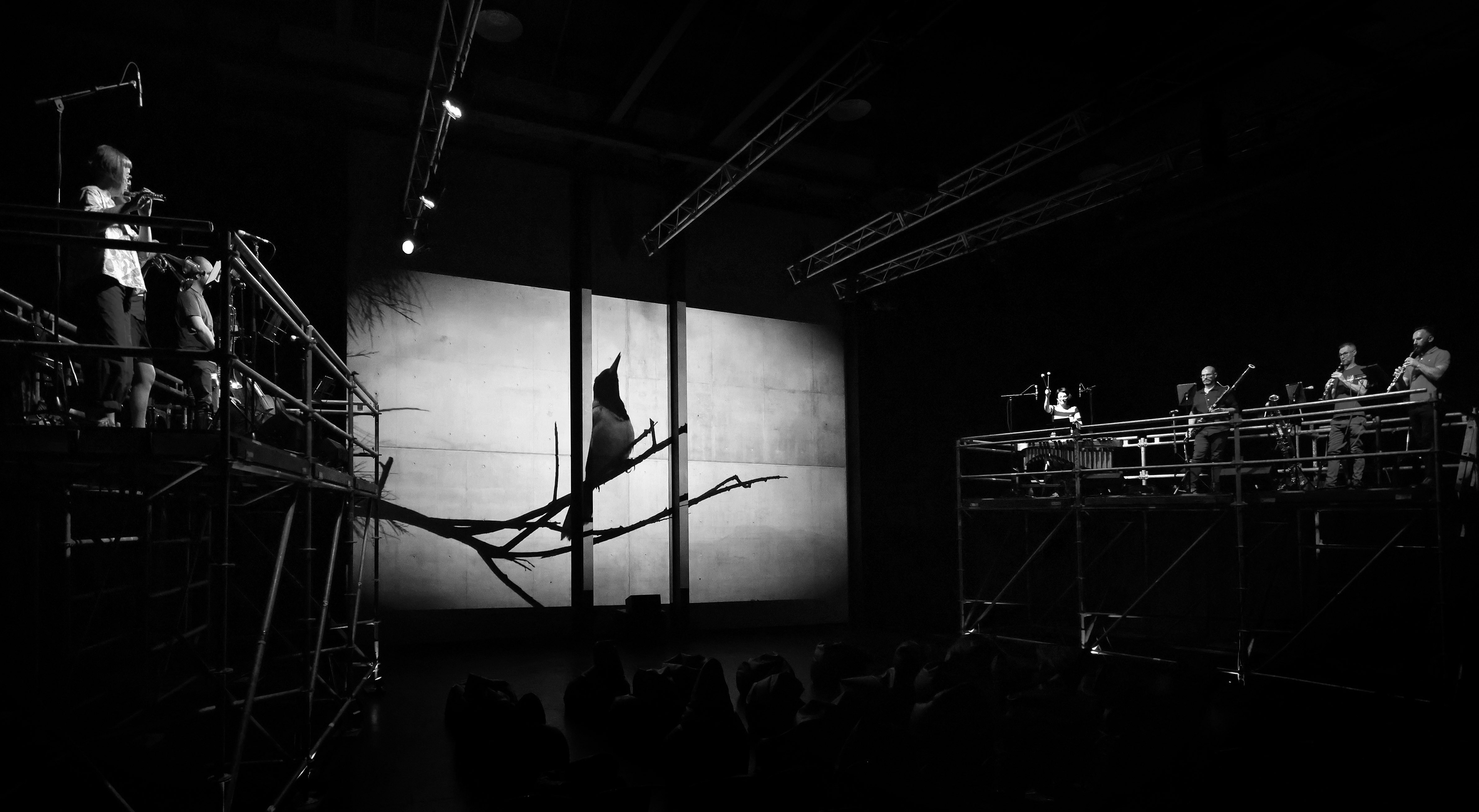 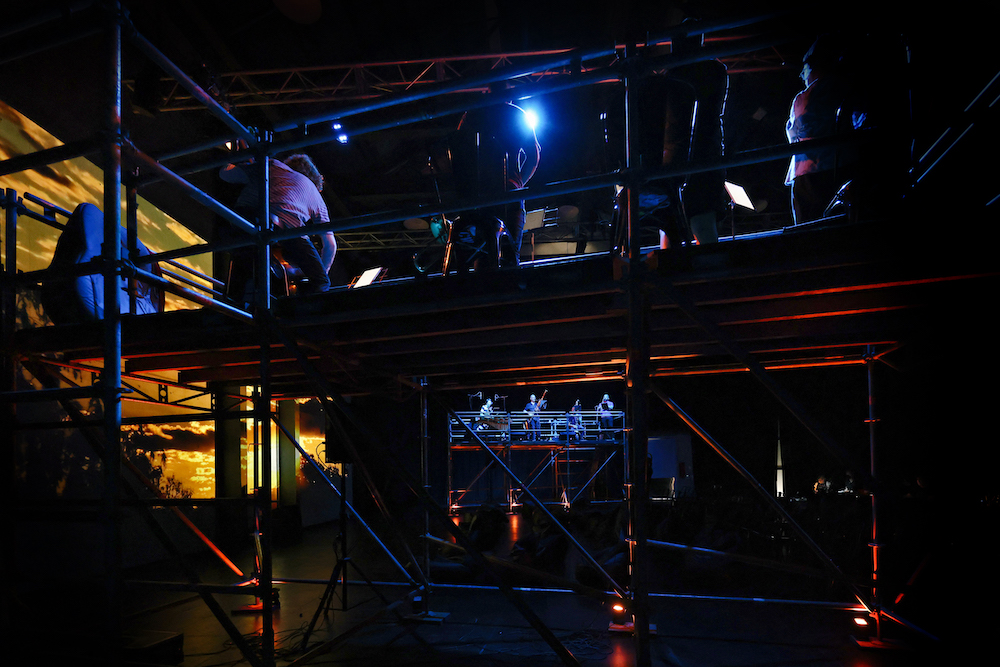 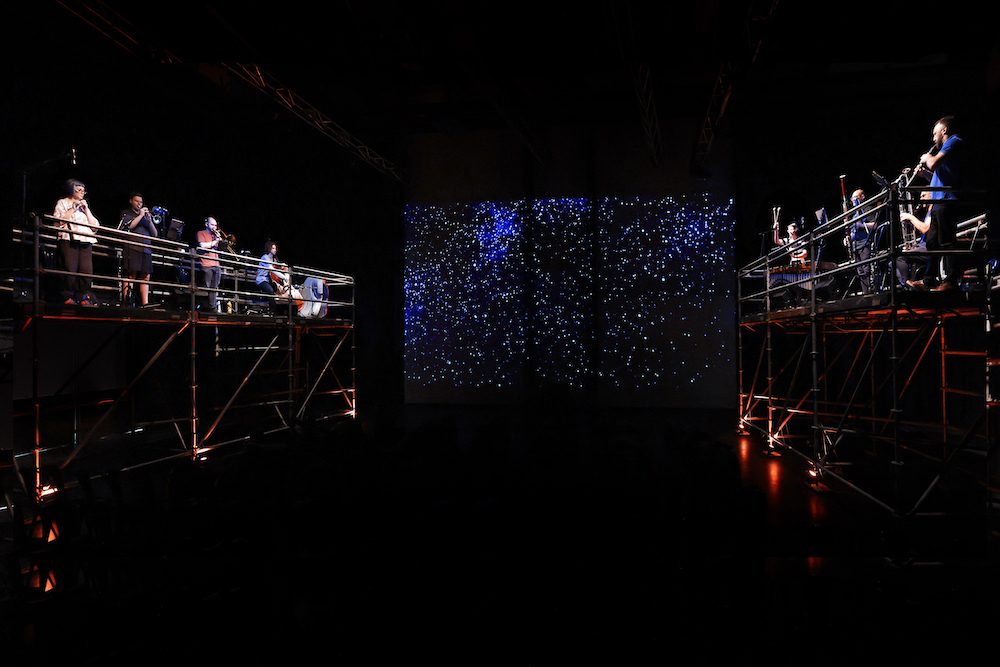 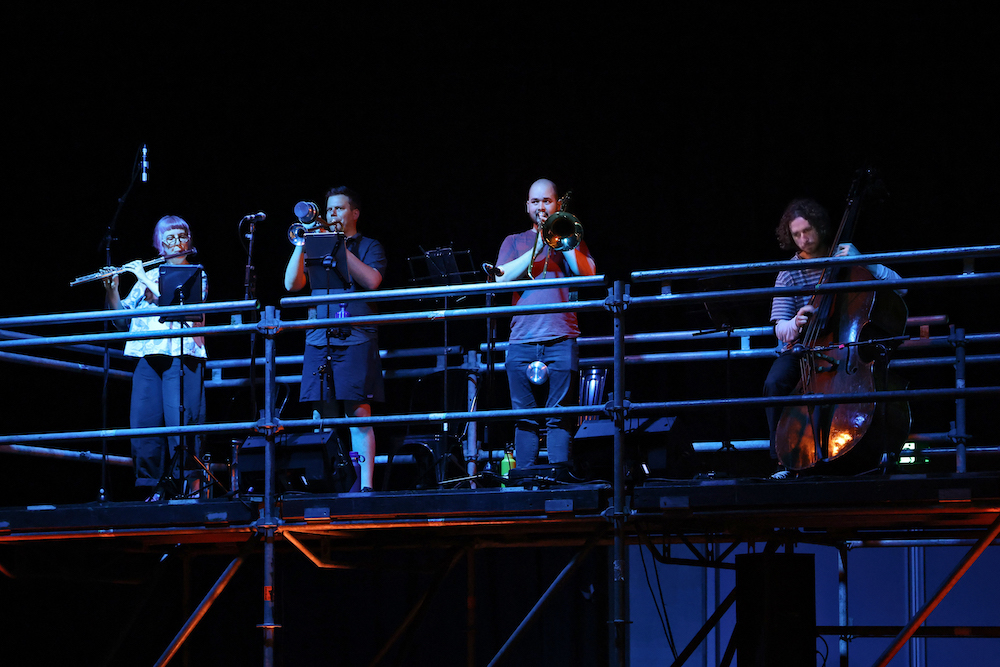 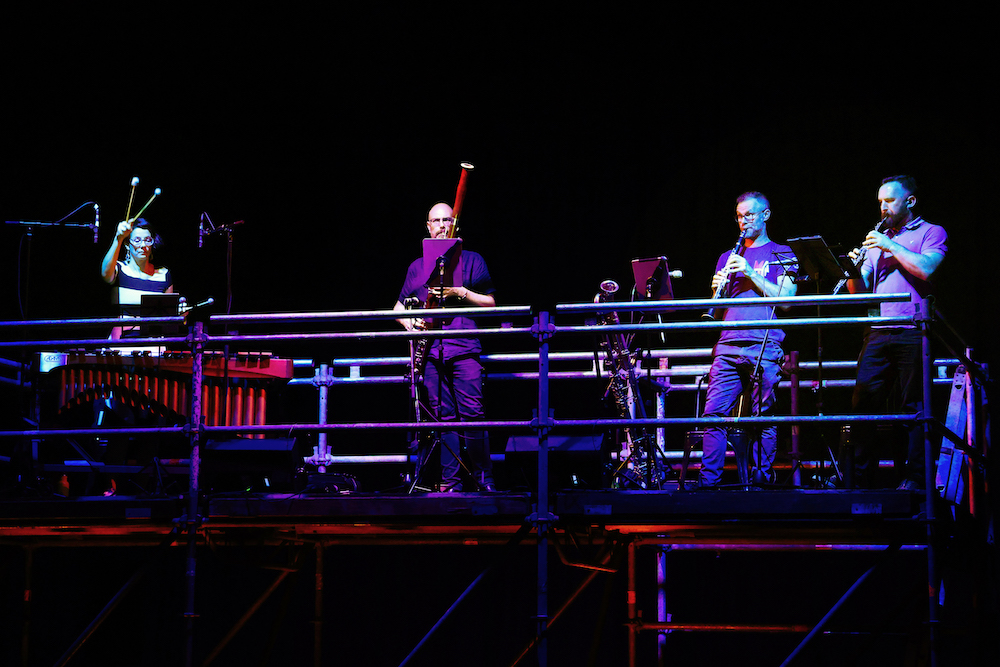 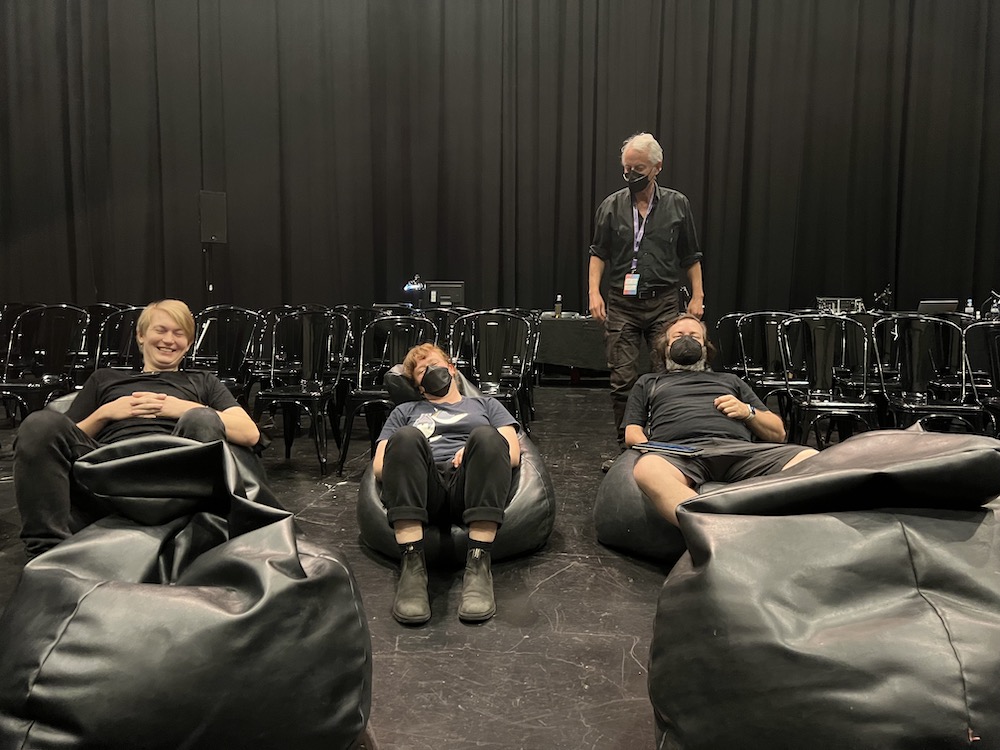