the tempered keyboards in my life

1. SHIP's PIANO
Some friends asked if I wanted an old ship’s piano. This symbol of historical migration probably came, and was played, on a ship to Australia in the 1930s. It had a wooden frame, and two men could easily lift this miniature of keyboard culture—plus the instrument could be tucked away in the corner of a space-challenged boat full of migrants or refugees with ease. In fact, two of us carried it from the ferry (through what pianist Alexander Schlippenbach referred to as ‘the middle of a jungle’) to my stone and fibro home halfway up the hill on Dangar Island, in the middle of the Hawkesbury River, NSW. Not visible on the surface, white ants were already chewing away at its innards. In addition, the felts were already eaten, the action extremely loose, the tuning pegs rusted, the hammers worn, the tuning vaguely recognisable, the sound always struggling to arrive, but with the aid of drawing pins the mechanism inside the Walnut Casing produced a kind of rickety cabinet of keyboard nostalgia.

Unfortunately, I don’t have a good photo of my Chappell & Co half-size piano (love at first site), so I’ve had to resort to the internet to find a similar model. For this short recording, I used some amplification via a volume pedal. The fate of this piano is unknown, but it is assumed the white ants devoured all edible parts (didn't those creatures realise that without the keyboard, the history of western music could not have taken place?). 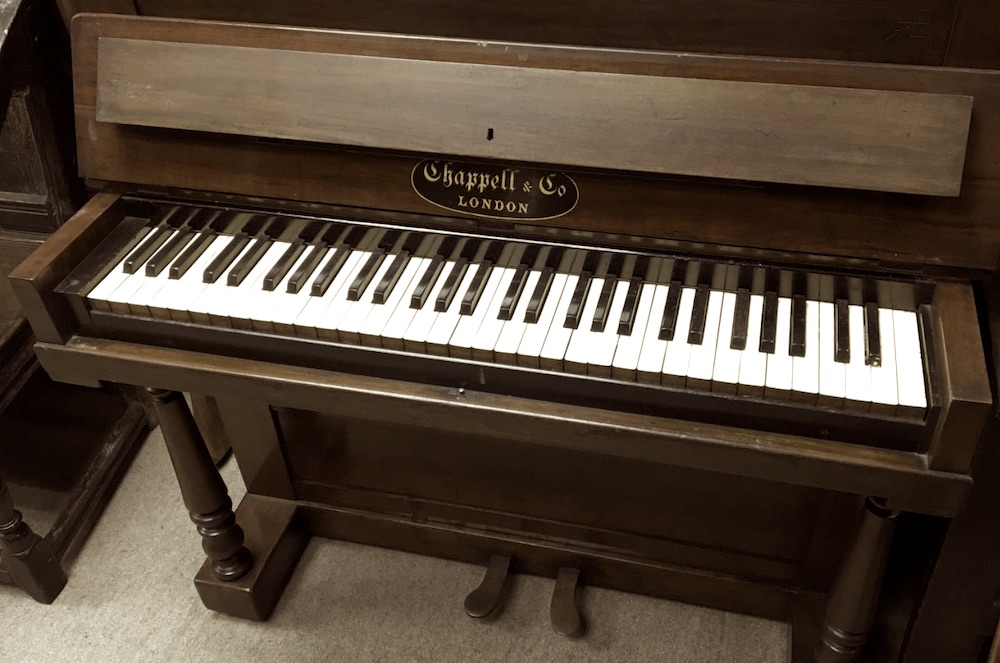 A Chappell piano similar to mine from 1980

2. PIPE ORGAN (SMALL)
Around the same time, as my music developed a more Klangfabenmelodie and vertical approach, I reckoned that illicit use of some church organs might be the ticket to realise my preoccupations. If I hadn’t become a violinist, then I would have become a pipe organist. To some, playing an organ may look like a one-man band exercise in discombobulation, to others a master stroke of bodily co-ordination or a demonstration of the cognitive abilities of an octopus. (It led to my concept of rogue counterpoint: using my feet on interactively programmed pedals at the same time as playing the violin with interactive MIDI bow seemed an efficient use of resources.)
On a visit to my parents in 1981, I made some recordings on four local church organs in the vicinity of Bridge, Kent, England. My favourite was housed in St. Mary’s, Patrixbourne. This funky instrument, with narrow pedalboard and an eight-foot Hautboy (oboe) reed stop, was built by G. M. Holdich pre-1878 and sounded/looked devoid of any recent renovation (recording—15/1/1981).

3. PIPE ORGAN (LARGE)
On returning to Australia, I managed to slip past the defenders of propriety to record on a larger instrument at The Uniting Church, Lindfield, Sydney. This 51-stop, 3-manual impressive beast has quite a history, which can be browsed here. Of uncertain origins in Dublin, the original 8-stop organ was transported to Australia (for criminal conduct, you see) where it has been added to ever since (including a thorough renovation and rebuild after my recording session). It is something of a wild animal. Instead of the half stop techniques developed by David Tudor and others, my little trick was frequently to turn the blowers on and off, sometimes generating uncomfortable eruptions of sound from the deep, as well as seriously untempered pitch relationships.

Not Violin Music5: recorded 22/9/1981 at The Uniting Church, Lindfield, Sydney

4. UPRIGHT PIANO WITH OR WITHOUT KEYBOARD
My last upright piano (there have been six donated to me over fifty odd years) also had white ant problems. I found the Rönisch Piano close to our house on Plateau Road, Springwood, Blue Mountains (2005?)— rejected, unloved. I think the desire for this collectable item was inspired by friend and colleague Ross Bolleter (he, the leading specialist of ruined piano fame—pianos ruined by climate and neglect). I retuned the top octaves of the piano so that the three strings designed to play one pitch sounded a three-part chord per key. In this manifestation it can be heard here in Entropy 2016 (played simultaneously with distressed organ and three-meter strung drainpipe).

And then one day the entire key bed, hammer shanks, butts, felt, springs, fall, spoons, dampers, wires, jacks and all, crashed to the ground. Having given up the unequal fight with gravity, I decided to lay the full eviscerated gubbins out in a suitable place of rest in the garden rather than attempt repairs. Which left me with a set of rusty strings and a sound board. A few years later, I designed some hand-held powered bow wheels and seized the chance of one last session. It is accompanied by a small box of interactive accelerometers triggering an aeolian fence and drum sample. Theoretically, this piece is playable in one take (each hand holding a string exciter, one real and one virtual), but I made live easier and recorded it in two separate takes. 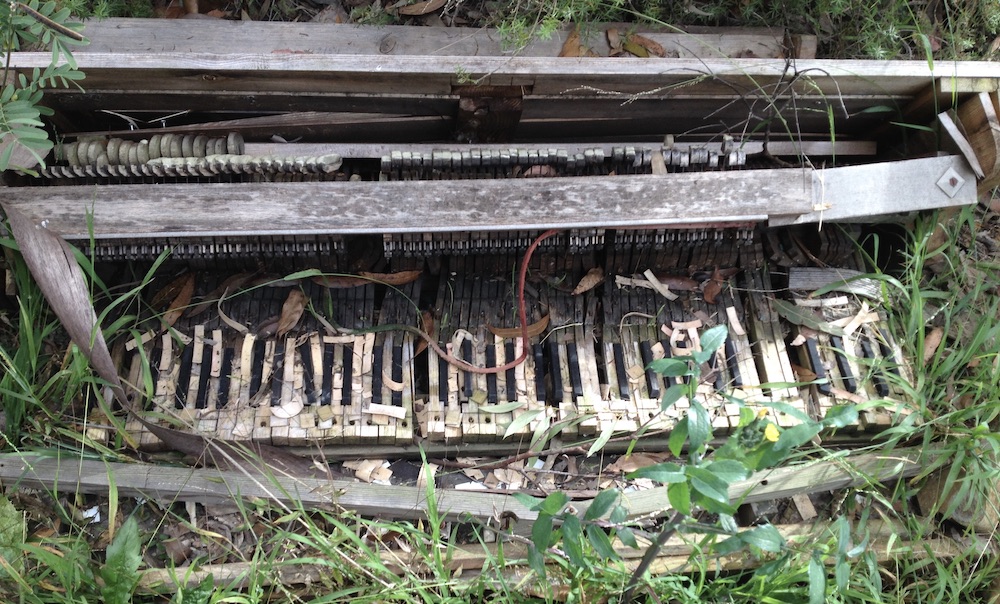 The Plateau Road Piano at rest

The Plateau Piano: recorded 15/3/2021 in the Garage, Springwood, Blue Mountains

5. ELECTRIC ORGAN
Not far from the discarded piano on Plateau Road, I found an abandoned (and distressed) electric organ in 2007 that had been left out in the weather for several months. The loudspeaker had a hole in it, which at full volume caused some violent flapping; with a screwdriver I could mess even further with that, and oscillators became stuck with tunings that can only be described as radical (see image). It was a classic 1970’s style Hammond' style machine named 'The European' for some reason, but manufactured in the USA. Due to size, weight, and dangerously dodgy electrics, it wan’t included in the removal to Alice Springs and was recycled after a short ceremony. An earlier recording using a revolving speaker and the rhythm section can be found here. 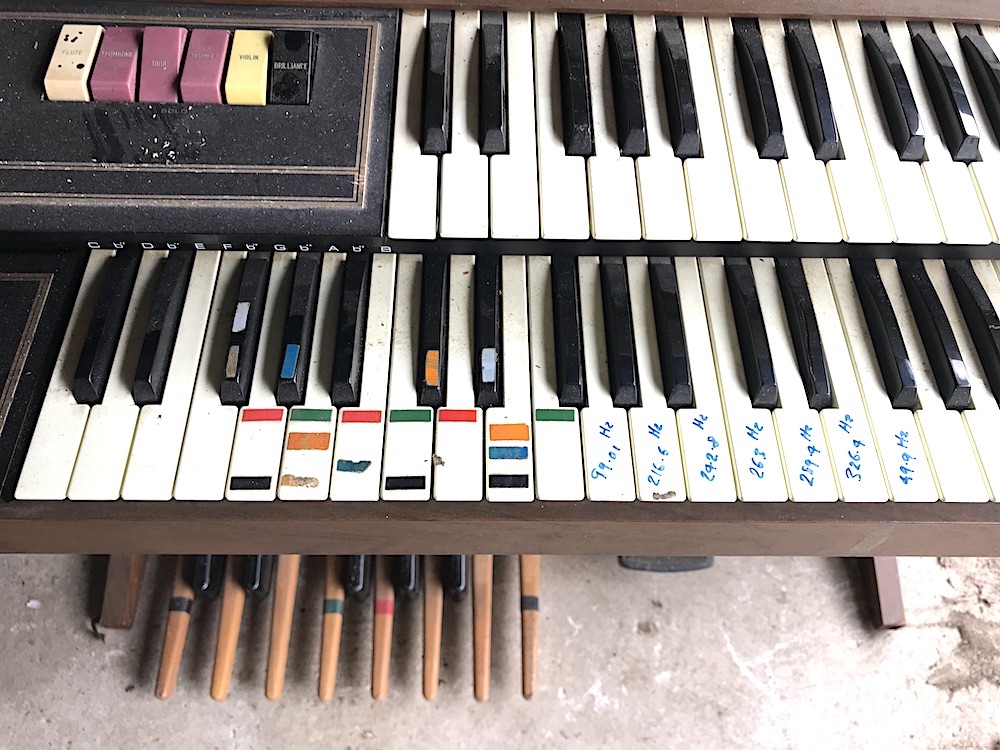 6. BALLAST 2017
A composition for piano and interactive electronics (via accelerometers worn on right hand) by Jon Rose, commissioned and performed by the brilliant virtuoso Zubin Kanga with programming by Benjamin Carey.
One of Samuel Beckett’s dark and pithy truisms, the full title is:
Habit is the ballast that chains the dog to its vomit.
The piece deals with the fundamentals of being an instrumentalist, whether it be a classical pianist like Sviatoslav Richter playing the same warhorse over and over or whether it be an improviser like Cecil Taylor. It is a sliding scale of degree, but both have to deal with this issue—the trusted habit and living dangerously. At one end of this continuum, there is a fixed sequence of notes that must be learnt as habit. At the other end, we have interactive gesture of movement from the pianist’s right hand that can never exactly repeat the same sonic results. In between, a mixture of interruptions to the sequence interpolates its way through a set of variations.
Thrown into the dialectic are impossible to play practical notions that the digital world allows us, particularly suddenly shifting the sequences up or down a few percentage points. It will make those who suffer from perfect pitch somewhat queasy, but hopefully no vomit, as Beckett would have no doubt enjoyed. Beckett goes on to say in the same manifesto: 'the pernicious devotion of habit paralyses our attention'. And in the days of wall to wall minimalism, that might be worth taking on board.

7. THE KEYOLIN
A Jingle Jangle Song.
An invention of the late and great Cor Fuhler, this hybrid instrument of keyboard and violin has taken its natural place in the Rosenberg Museum. Set up with contact microphones amplifying both bowed and unbowed part of the string, the state of contrary motion is revealed. For details on this, the technology, aesthetics, tuning, and the full video available here.


The Keyolin: recorded 2/11/2020 by Jon Rose in the Garage, Springwood, Blue Mountains 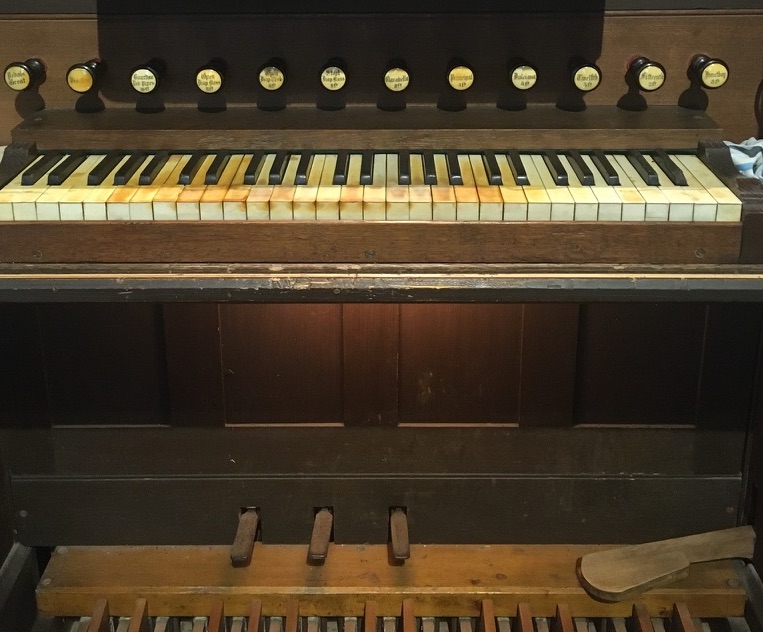 Manual and stops of The Holdich Patrixbourne Organ 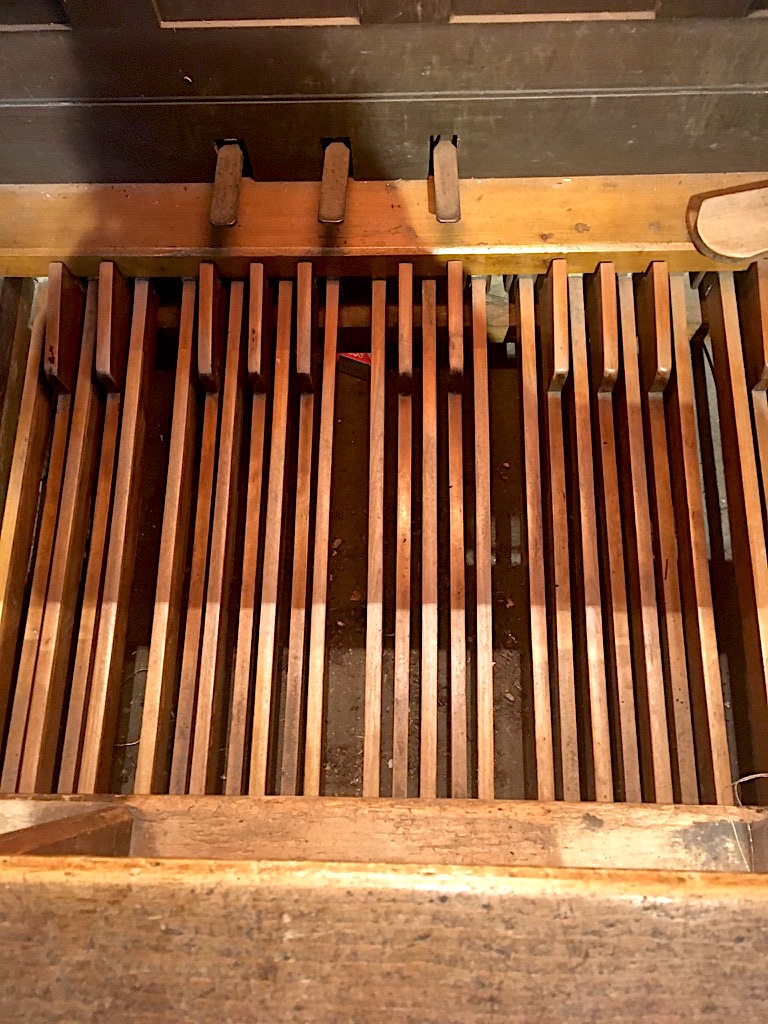 pedalboard of The Holdich Patrixbourne Organ 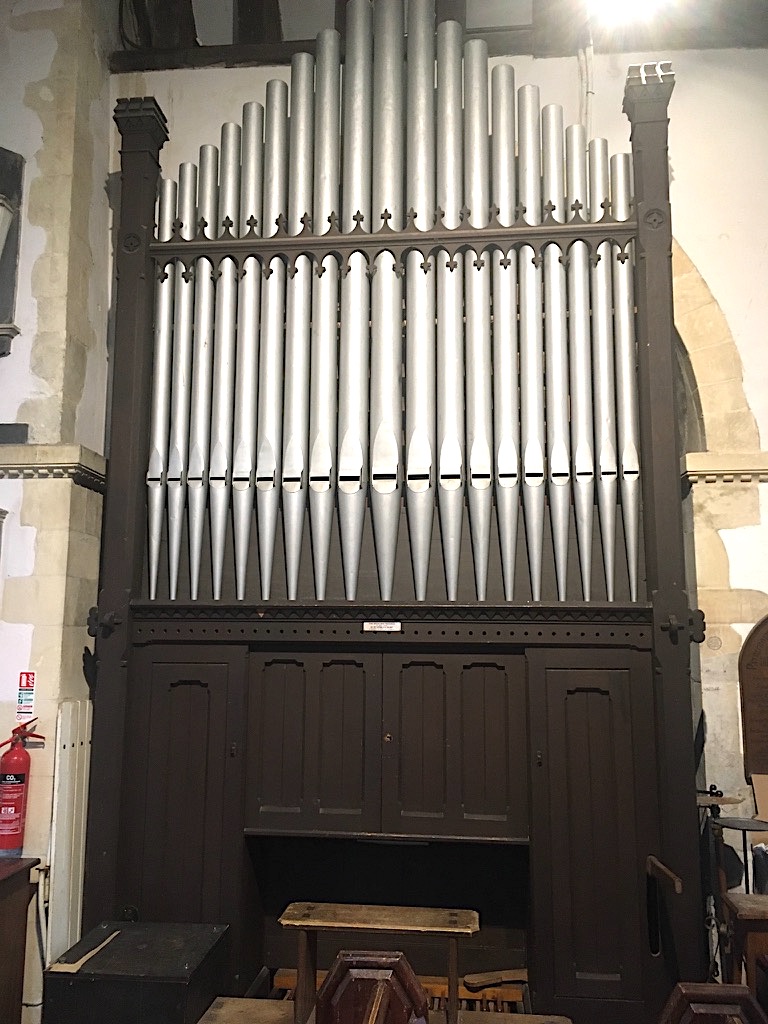 the front of the Holdich organ (photos Andrea Nicholson) 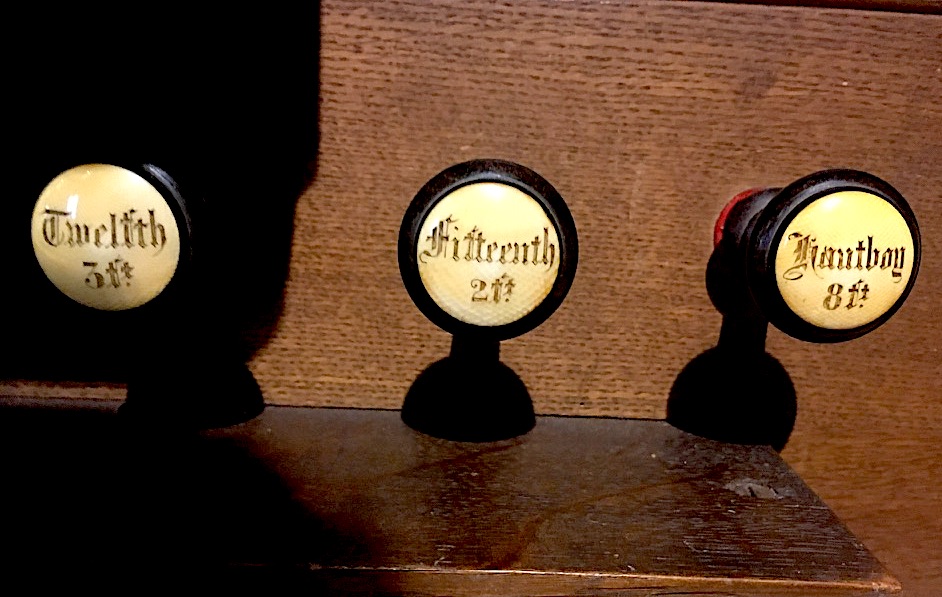 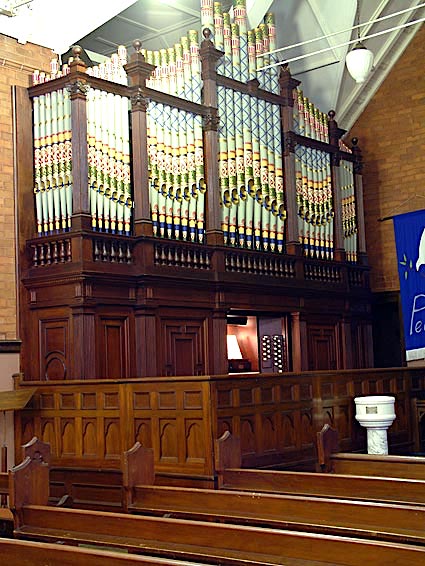 a story of re-builds and renovations from 1839 onwards 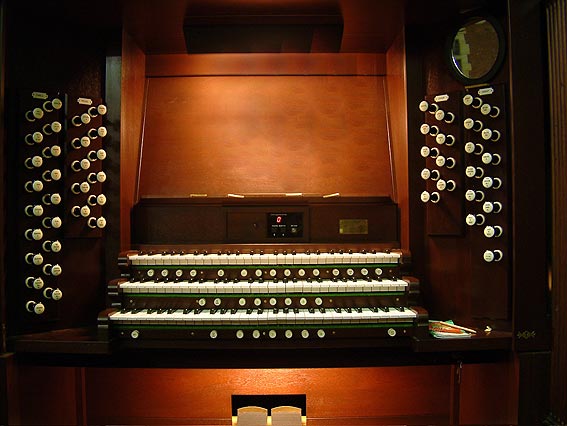 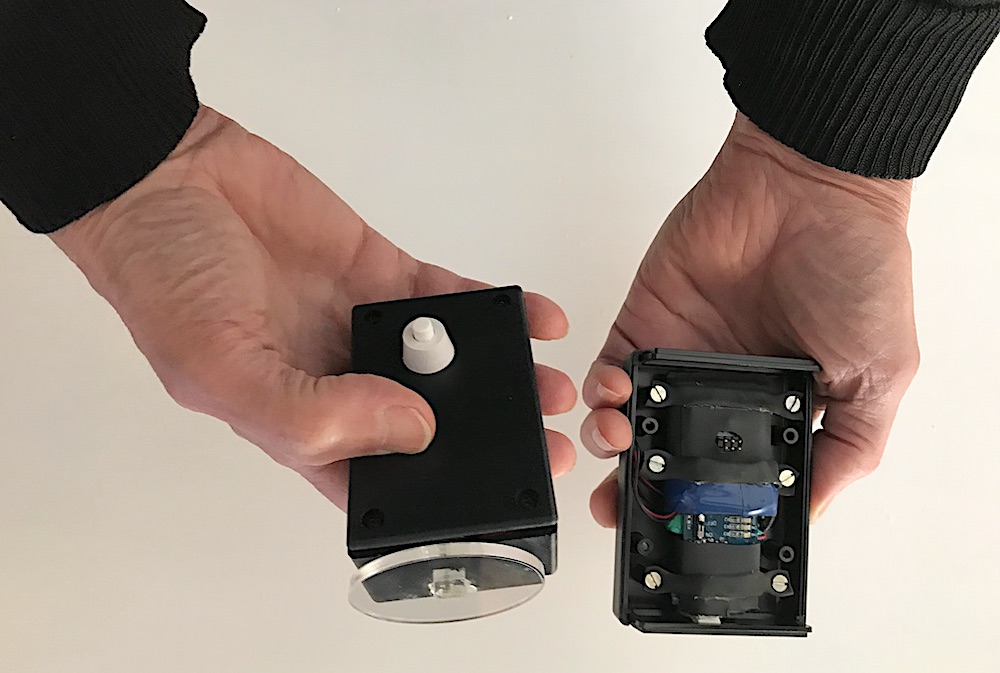 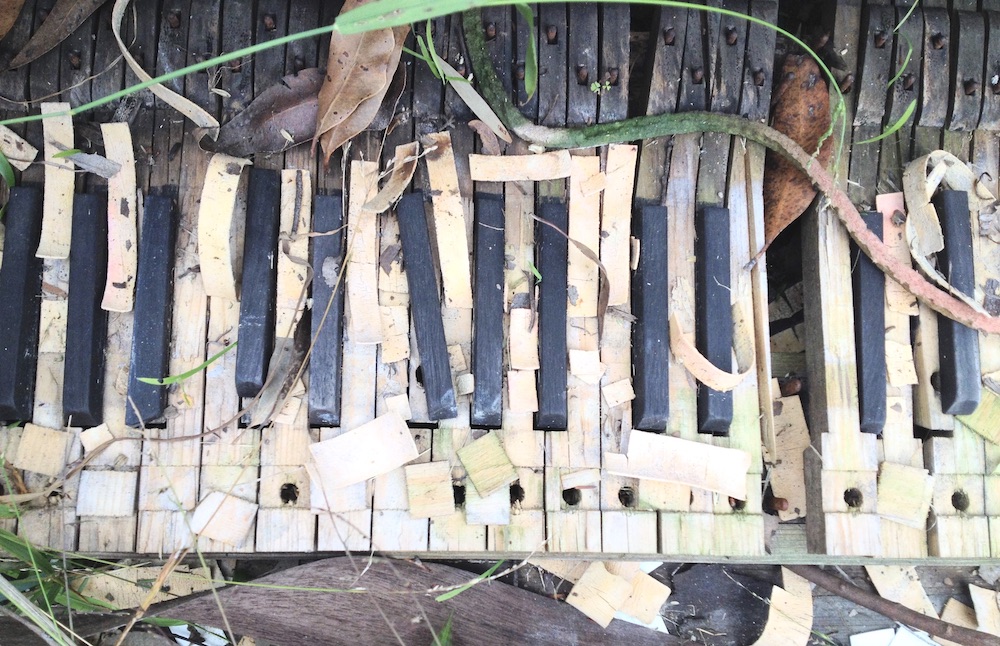 The Keys of The Plateau Road Piano slowly disintegrate 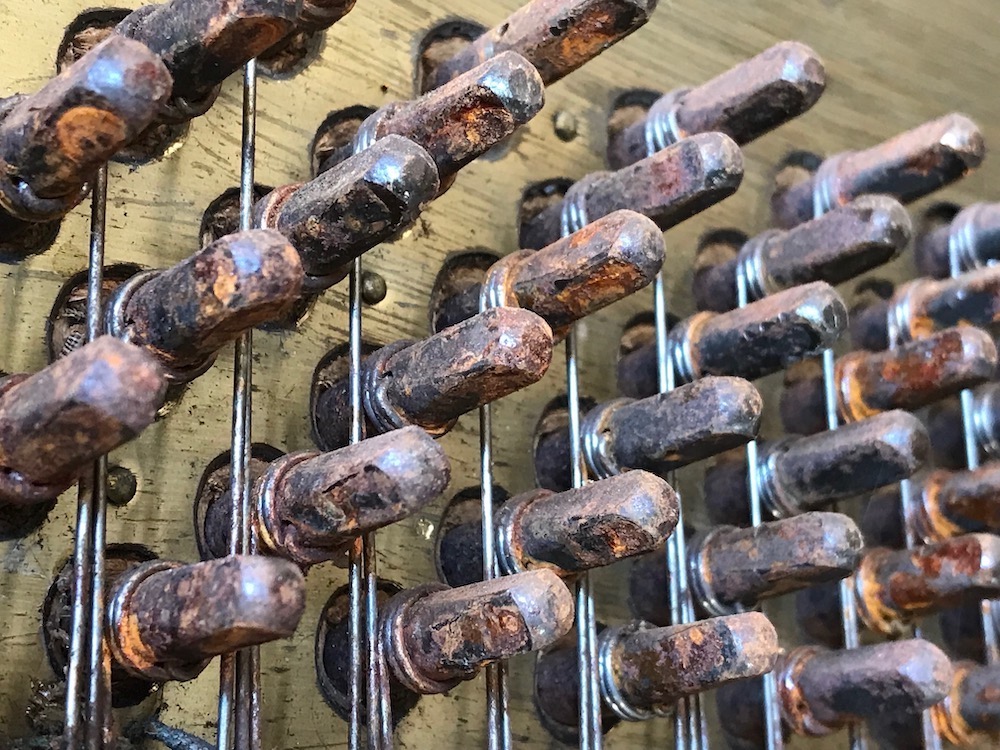 The Tuning Pegs of The Plateau Road Piano slowly rusting 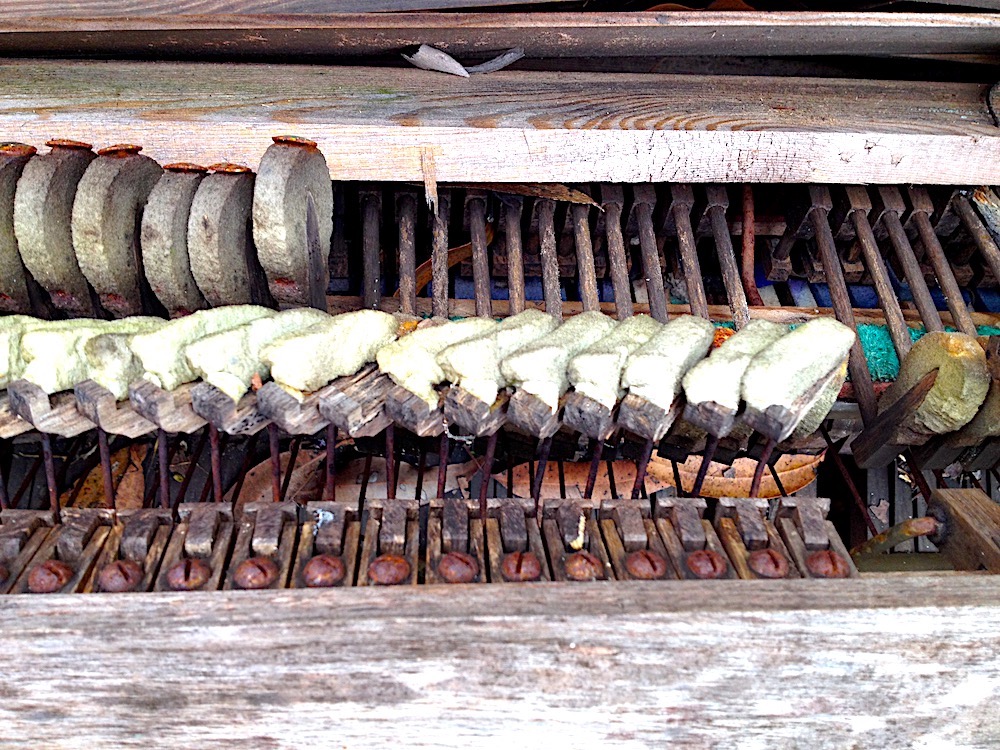 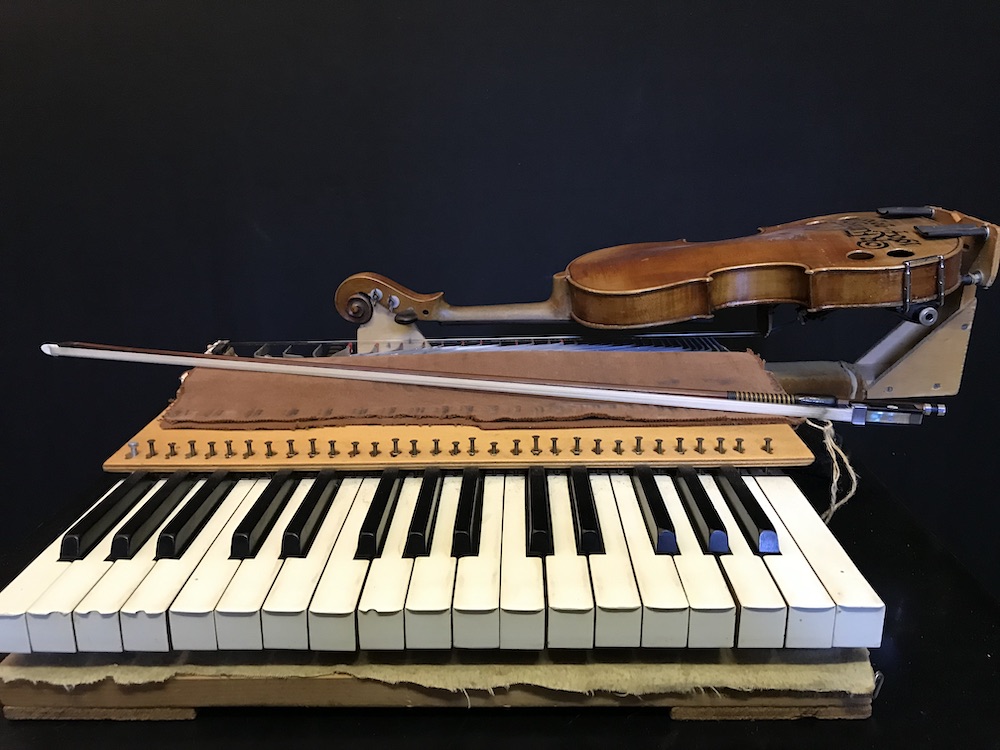 The Keyolin in The Rosenberg Museum
website by jos berkers