This letter was written over 25 years ago. Since then the interactive bow system has been developed further with the use of accelerometers and much faster, more complicated and subtle computation. And there are now tens of thousands of lap top sound artists delivering endless amounts of digital sound in a new orthodoxy which demands separation from anything to do with the history of music or knowledge of musical instruments. Well that's a little unfair - there is one aspect of history that dominates the aesthetic - the mixing desk.

I've decided to leave this page up because 25 years ago I was getting shit from improvisers; then it came from sound artists. I feel happy enough swimming against the tide. I'll give it another 10 years I think.

Recently after a concert in Beijing, I was asked to give a lecture to some music students about improvising and interactive software. They were 'Jazz' students, specialising in 1970s jazz-rock, so I wasn't so sure how it would go down. In the event (and in spite of some wild translation) they seemed to find no aesthetic or ethical problem with the whole business. This experience contrasts strongly with my experiences of many 'Improvisers' to be found in Europe. There, reactions range mostly from a kind of 'Luddite' aggression to various 'put-downs' based on willful defensive ignorance. Strange really. I used to think that one important characteristic of an improviser was openness to new ideas. (What ever happened to fantasy too?) Anyway, I suspect that there are two subjects that will guarrantee much debate over the next 20 years, computers and our relationship to them.

First of all. I don't play a Midi violin. The reason I don't play a Midi violin is that for me, it is too direct, too much like a well trained digital parrot (in the same way that improvisers get fed up if there's too much copy-cat playing in group improv.) O.K. you could write software that would irradicate almost any kind of connection between Midi violin and the actual computer instruments used (synth, sampler, etc) but then that for me would be pointless. I am looking for a physical connection (haptic feedback), not trying to avoid one. For this reason also, I don't use a pitch to midi interface via a microphone. Sure, the sound is there but if sound was the only thing in improvisation, I'm sure we could find something better to do with our time than go through all that sweaty, messy business that demands a physical personel source for the music. (The use of digital affects, including the ubiquitous delays and loops, I find also has little to do with an interactive system.)

I utilize two interface systems which attempt to bring together the physicality and dynamics of improvised music (as played on a violin) with the quick change and virtual possibilities of computer music. The first interface uses ultra sound mounted on the bow or the violinist's bowing arm to measure the actual movements of the bow. The second utilizes a sensor, built into the bow itself, to measure continuously the hairpressure of the bow on the strings (the driving force or motor for the violin). Naturally factors such as humidity, temperature, how tight the bow was tightened before playing, which end of the bow is being utilized, the pressure used in the previous bow stroke (ie. after a well dug in bow stroke, the bow might still be in the process of expanding and doesn't get time to reach its normal rest state before the next stroke), etc. determine a very organic, chaotic and unique character to each concert outing....a fundamental necessity for an improviser wanting to take chance or two! (Whatever happened to that idea too?)

Within the programme are 32 mapping tables. These can be set to work within a scale, a waveform or the choice of notes can be generated by random generator, algorithms, graphic procedures, or interpolation of sequential patterns between fixed points. Superimposition of these structures in real time lead to very complex patterns but these patterns nevertheless always retain a degree of self similarity due to the physical and rhythmic consequence of the bow. This complexity must also operate in an ever changing mode because of the adjacent violin output/ performance operating in parallel, against or with it - ie. those physical actions, movements and techniques of the improvising violinist.

This means that specific areas of interaction can be set up which focus on some found sonic or physical relationship between the two systems. Add to this the voice coming from the violin and there are three pools of information which, through the action ofhorizontal bow movement or vertical bow pressure combine to form musical structures that appear to be pulled together by some kind of attractor (to use Chaos Theory jargon).

Sometimes the attractor is clearly the violinist who can at any time achieve a demonstrative role (ie. he can shield information from the sensors, he can stop playing, scratch his head, or turn the whole thing off in disgust, etc). But at other times it seems there is a control centre working away independently of all constituent parts, as happens often in the best of improvised music.

Most improvisers interested in interactive technology do not go down to their local 'Guitar & Drum Land' armed with a few thousand of their favourite currency and buy the latest gismo off the shelf. They put in often years of their time developing personal skills, bits of homemade hardware, writing their own programmes, etc. Small scale & low budget seems a common attitude. I've been working on my stuff for about 10 years now and it seems a natural development from all the deconstructed violin instruments (combined with analogue electronics) that I once made. On the scale thing, I've tried to keep a one to one connection between violin and digital instrument by using only one midi channel in performance. Sort of basic monophonic solidarity! For me, an important aspect of expression comes out of pushing the natural physical limitations of an instrument to the edge of its possibilities, this includes digital ones as well.

But the bottom line in all this is....is that it fulfills a creative need. A sustaining, physically exhausting and sometimes quite humorous experience for performer and audience alike. If it was a repeat show everytime, I for one would soon get fed up with it. In this sense, it's a challenge in the same way that playing with any resourceful improviser can be. The process maybe determined by the constituent parts of musician and technology but any definition would be quite reductive in trying to describe the quite beautiful psychological and physical states attained in this kind of music making. We all deal with the man and machine myth, even acoustic guitar players have to twiddle their machine heads. It's simply another (and very actual) possibility for an improviser and does not deny, exclude or compete with the joys of more traditional forms of 'free' improvisation.

I have received a lot of help and encouragement from STEIM (Amsterdam) in putting my violin/binary exploration together. If anybody reading this magazine is interested in developing their own work in this area and doesn't know where to go, how to set about it, etc.....write to STEIM, 19 Achtergracht, and fix up a date to visit.

Both hard and software for this project were developed in conjunction with STEIM, Amsterdam. 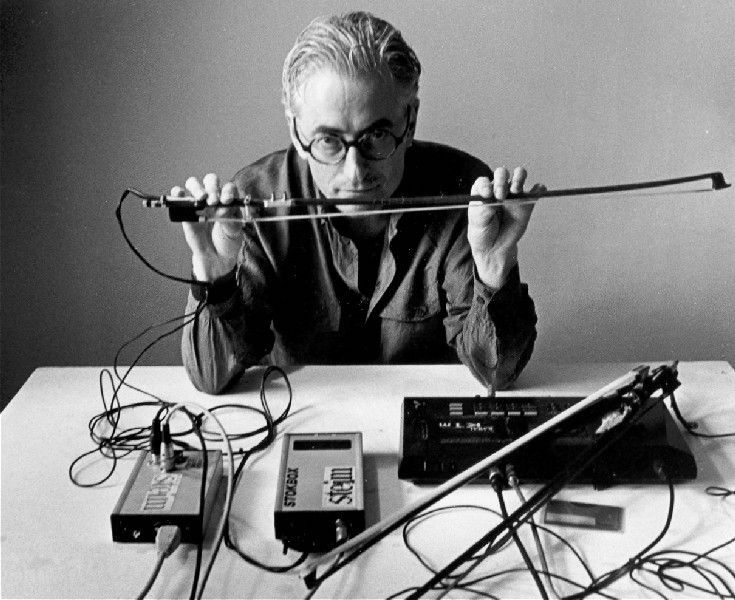