Turn on/off the embedded sound - you are listening to an extract from the tchaikovsky violin concerto with solo part as improvised by jon rose recorded live with the scottish bbc symphony orchestra and conducted by ilan volkov on 4/10/06 broadfcast finally by the bbc on 1/3/2008 - this is a copy of the internet broadcast.

on improvising an alternative version

One of the main aims of the Relative Violin Project was to take the improvised violin into unusual, radical or disturbing territories. The Kultural Terrorism project of the 1980s with Eugene Chadbourne involved exhaustive cutup improvisation of every genre we could remember or imagine. BUT there was one option that never came up, probably because it would have required the hiring of a 70 piece symphony orchestra to do it - I'm talking about re-contextualising a core romantic violin concerto.

Ilan Volkov is chief conductor of the BBC SSO and is probably the only conductor of a major symphony orchestra who has ever heard of 'improvised music', let alone be intent on incorporating it in his concert programmes. John Oswald of plunderphonic fame suggested that the third movement of Tchaikovsky's violin concerto be inserted into an evening programme of his and Chris Cutler's pieces and concepts. I was asked to improvise a solo over the top of the unchanged orchestra score. I suggested a cut up of all the famous violin concertos with the Schoenberg thrown in to add to the general confusion. Oswald declined for reasons of time and the fact that all of his other pieces being performed were pastiche of one kind or another. So it was a question of take up the challenge or decline.

As one of the double bass players was heard to remark after the idea had been explained to the orchestra at rehearsal - 'violinist about to commit suicide'.

As the leader of the SSO remarked to me after the performance - 'It's a hell of a piece no matter how you play it'.

I realised when I started to get my chops up to speed for this event, this would test the art of improvisation to the maximum. There is little room to move, the orchestra doesn't react to anything you may play, it's high speed and so the violinist decisions must be on the spot, split second intuition. To add to the problem, old Tchai has the solo part out front most of the time on the beat - the orchestra often syncopated after the beat. This is quite an odd situation as the improviser has nothing to grab onto each time the main theme returns - you have to make the running. With a loud violin in your left ear, it is also difficult to actually hear the orchestra when it is in accompaniment mode. I didn't want to ignore the orchestra completely and just play anything, I wanted to really try and improvise a new solo violin part over the changes.

After the orchestral introduction, we hit the ground running. Improvising a cadenza might strike terror into your average classical soloist, but it is a no brainer for an improvising violinist. To create some more tension, I started to play it off stage and gradually move up stage to the traditional solo spot where I assumed the violinist was supposed to stand and where i was met by a grinning conductor. From then on we made merry in some kind of east european violin theme park.

The B section of the movement presents no problem, it's an extreme folksy thing and my main issue was with the cellos - I suggested that they play it sul ponticello in an effort to get it back into folk idiom from whence it had been ripped off. They wouldn't.

Other issues? Do you try to play when the orchestra is going full tilt? Much to my surprise at the rehearsal, I could still hear myself but I knew there was no way it would be heard in the hall unless the orchestra came down in volume.

Polytonality may be an option on a fixed tone instrument like the piano, but on a violin it just tends to sound out of tune when played next to a symphony orchestra routed in euro-tonality. So for the first time in a long time I practiced scales in D major, its relative minor B, G and A major. In the concert itself, stretching for pitches way up the E string for the first time in the Tchai was essentially a huge risk and sometimes I missed a few. At least I remember thinking that. It all happened so fast, mostly I remember starting and the end (which I extended with E flat major chords; probably an attempt to expunge all that D major stuff).

How many times do you rehearse an improvisation? Surely a contradiction in terms. We played it through once in rehearsal and left it at that - any more and I think we would have started to formalise it, thus defeating the point of the exercise. As with many improvisations, there were great bits, dull bits, awkward bits, odd bits - and plenty of bits I may have played better.

In 1879 Leopold Auer pronounced the Tchaikovsky violin concerto as unplayable. This guaranteed that following generations of violinists would struggle for years with this iconic battle between unequal forces known ironically as the romantic violin concerto (concerto meaning together).

The Russian composer Tchaikovsky is surely not an ordinary talent, but rather an inflated one, with a genius-obsession without discrimination or taste. Such is also his latest, long and pretentious Violin Concerto...The violin is no longed played; it is beaten black and blue...But it soon breaks off to make way for a finale that transfers us to a brutal and wretched jollity of a Russian holiday. We see plainly the savage vulgar faces, we hear curses, we smell vodka. Tchaikovsky's Violin Concerto gives us for the first time the hideous notion that there can be music that stinks to the ear. 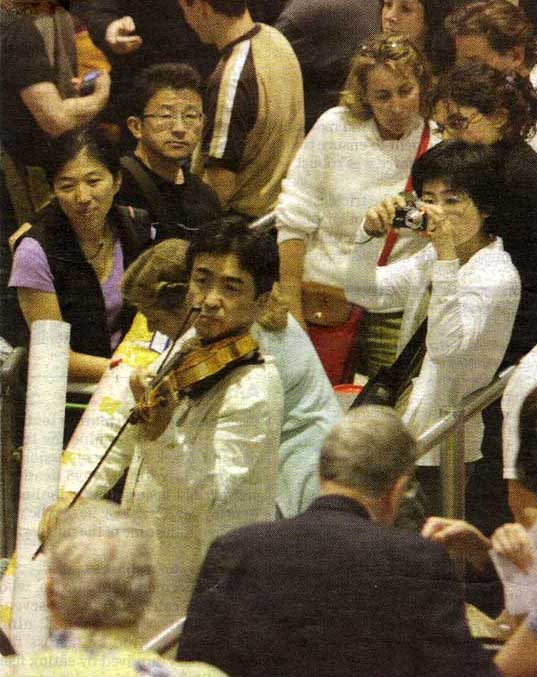 We are unable to bring you a current photo of Tchaikovsky as he has been dead for several years. In his place we bring you a photo of an unknown violinist entertaining passengers caught up in the chaos at Heathrow airport at the height of a government instigated terror alert 2006
photo Jeff Moore
website by jos berkers