Turn on/off the embedded sound - Some of the Violin's Relatives in this mix from the Rosenberg Museum, Alice Springs, 2022

bowed strings from around the world

It was Martin Davidson (Emanem Records) who, back in the 1980s on hearing about my Relative Violin project, sent me a cassette with the title The Violin’s Relatives. From his substantial collection of recorded music, he had created a mix tape of stunningly varied bowed string music from around the world - including a number of pieces played on ubiquitous two-string fiddles that seem to have a universal pedigree and appeal.

Prior to that, in 1975 while I was working in London, the Arab oil-rich states (in a time of oil crisis) had decided to show off to their former colonisers with a series of extravagant exhibitions featuring Islamic culture (a gold domed mosque in Hyde Park was also on the agenda). I attended an exhibition of Islamic music and musical instruments. A vast smorgasbord of bowed and plucked instruments were there to be enjoyed; these instruments had just been collected in the year prior and mainly originated from around the rim of the Mediterranean.

Amongst the classical instruments were many of dubious parentage with immaculately carved scrolls and necks stuck into gourds, petrol cans, coconut shells, lumps of chiselled out driftwood, packing cases, Coke bottles - in fact, almost anything that could act as a resonating chamber and was easily (freely) available. 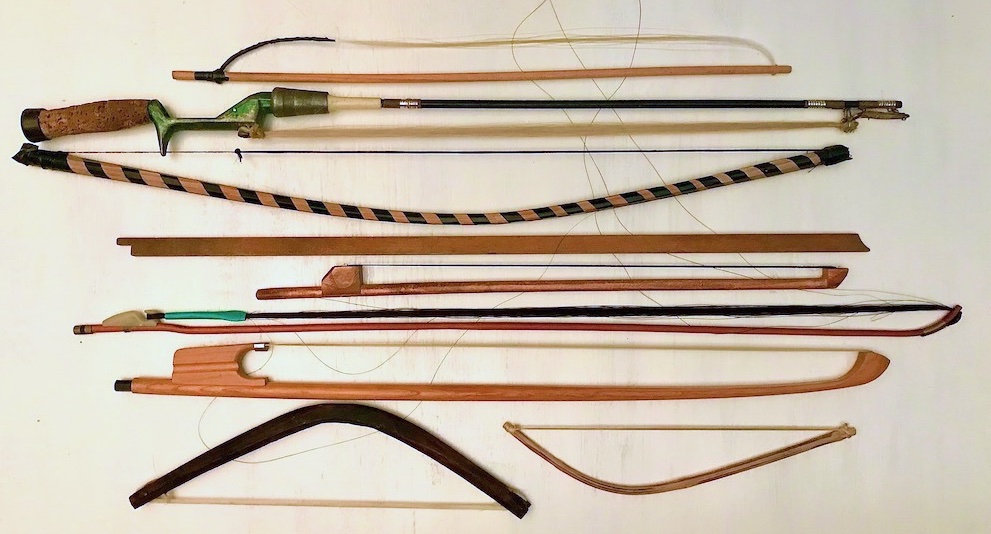 From the Rosenberg Museum Bow Collection. The wide variety of materials, styles, and innovation mirrors the instruments themselves.

Design and material came with little in the way of specific rules - just practical and aesthetic application. To someone like me who had lived through a rigid violin education, this was a revelation. The violin had been offered to me as a given fixed artefact, immutable. With the historically informed movement in classical music, this tendency has lightened up somewhat, but compared to the Islamic tradition, not much.

The often confusing nomenclature of the violin’s relatives underlines the intercultural flexibility.

For example, in the Rosenberg Museum we have two one-string ‘Horse Head’ fiddles - one instrument being a half-size version of the other. Although they may well have arrived in Europe with Asian horsemen, these instruments are supposedly not related to the Morin Khuur, which is a Mongolian Horse Head bowed instrument usually fitted with two strings. However, our Horse Heads go by the name gusle and are claimed as Balkan instruments - and gusle is very close to husle which is the Slovakian name for a regular violin and a whole other ballgame. You can see the problem? Then there are a host of lyras, and lyres, let alone all the rebabs, rababs, rebecs, rubabs, rebebs, ribels, rebels, rababas, and rhubarbs (I made the last one up). These instruments may come from around the world but this is NOT world music, it is an investigation into how bowed strings and resonators from diverse traditions might talk to each other through the process of improvisation. 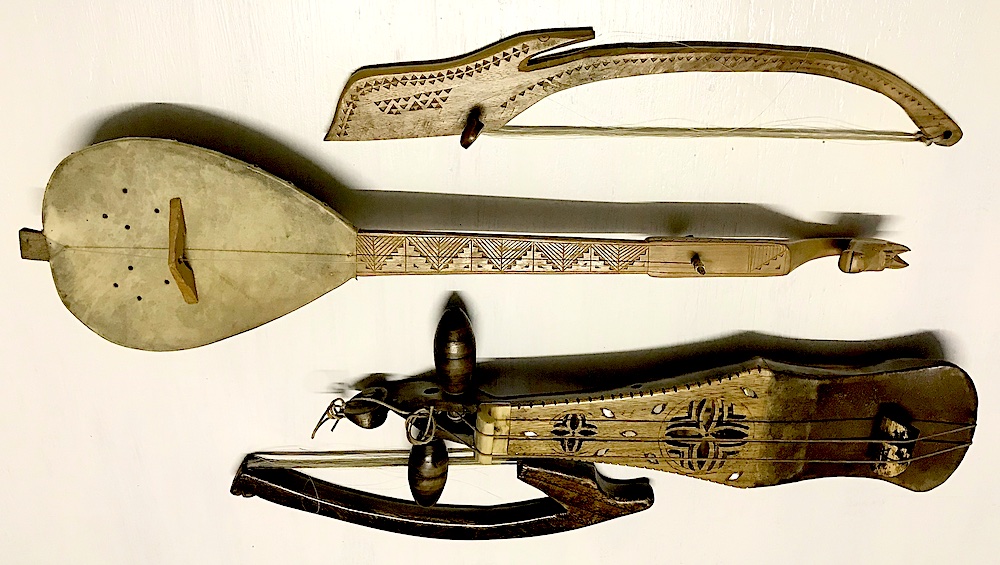 A Balkan Horse Head Fiddle or Gusle and a Moroccan Rebab

Is it a horse's head or a goat’s head? A Lahute is resident in the Rosenberg Museum and is claimed by the Kosovar Albanians as the oldest string instrument of Europe. Our exemplar is missing the goat’s head but has a unique string, consisting as it does of nylon threads and regular string joined in the middle with a large key ring. Regarding the goat, I suggest readers refer to Rosenberg 3.0 - not violin music, The Origin of the Wheeling Goat. There you’ll find useful musicological research as to 'playing the goat', 'on the goat', ‘splitting the goat’, and 'milking the goat' - something of a Greek 'tragedy' (the orignal meaning of which was goat song).

Regarding strings with interruptions in their physical continuity, I refer the reader to the traditional practice of Romany cello, double bass, and gardon players in tying knots in their strings - the latter being beaten with a heavy stick, not a bow. The bowed sound produced is akin to ring modulation. As to what kind of knot yielding what kind of modulation? This knowledge is yet to be researched.

A mix of some these Violin's Relatives is available at the top of the page, but I suggest you make your own mix, match or shuffle as they all talk to each other in various ways - the Lahute goes with almost anything. Warning...playing more than three tracks at a time could do your head in! All instruments were played by Jon Rose in The Rosenberg Museum.

Turn audio on/off - Albanian Lahute. This recording incorporates bowed rhythms and a modulated tone (caused by the string held together with a key ring).

Turn audio on/off - Chinese Er-Hu. The only instrument in the collection where the bow hair is threaded between the strings - notable for speed and a very wide vibrato.

Turn audio on/off - The Australian Tinolin. This little number was more likely to have been seen and heard outback with renditions of 'Click go the Shears' than the music I have produced with it!

Turn audio on/off - The Vietnamese Đàn Goong. The Rotating Bamboo Zither has been fitted with additional housing and crank (audible clonks). This comes Curtesy of Daran who placed the instrument hanging on the wall of his music shop in Alice Springs for years...before I turned up.

Turn audio on/off - The Cretan Lyra. The second half of the recording is played with a hand held motorised wheel bow.

Turn audio on/off - The Moroccan Guibri or Lotar. Bowed gut strings at their most exquisite. 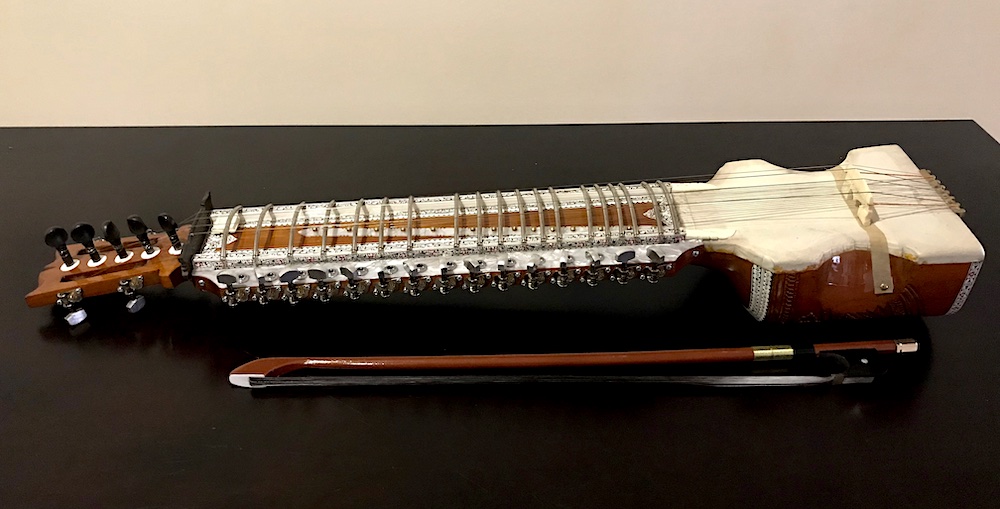 The final example in this research project features the dilruba. Nearly 50 years ago, in the squatted house where I lived in south London, the door bell rang. A charming Indian man was enquiring as to whether I played the violin (as he had heard) and would I teach his two young children the basics of music. He gave me some cash and a dilapidated dilruba as payment. At the time I also had a sitar, so a bowed alternative was welcomed. Later in Australia, a drummer colleague gave me a sarangi - I didn’t ask how he came by it. None of these instruments made it into the 21st century. Recently I amended this situation, as what is a string instrument museum without a dilruba? So I purchased a brand new one from India and here it is tuned to the Khamaj (Lydian) scale. 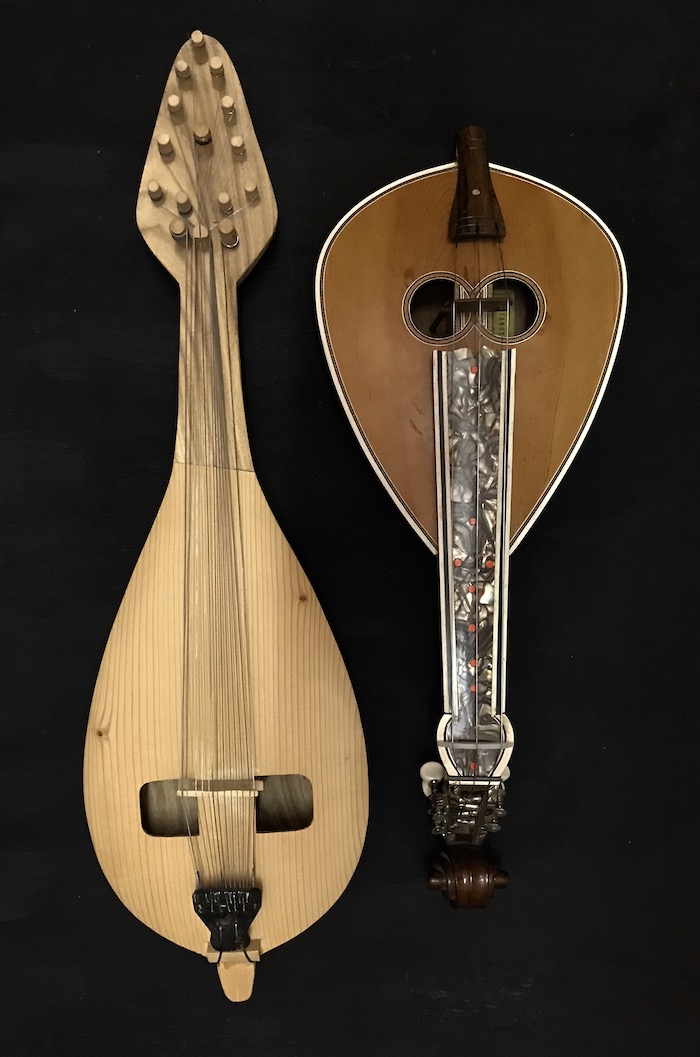 A Cretan Lyra and a Bulgarian Gadulka. Both featured sound files on this page. 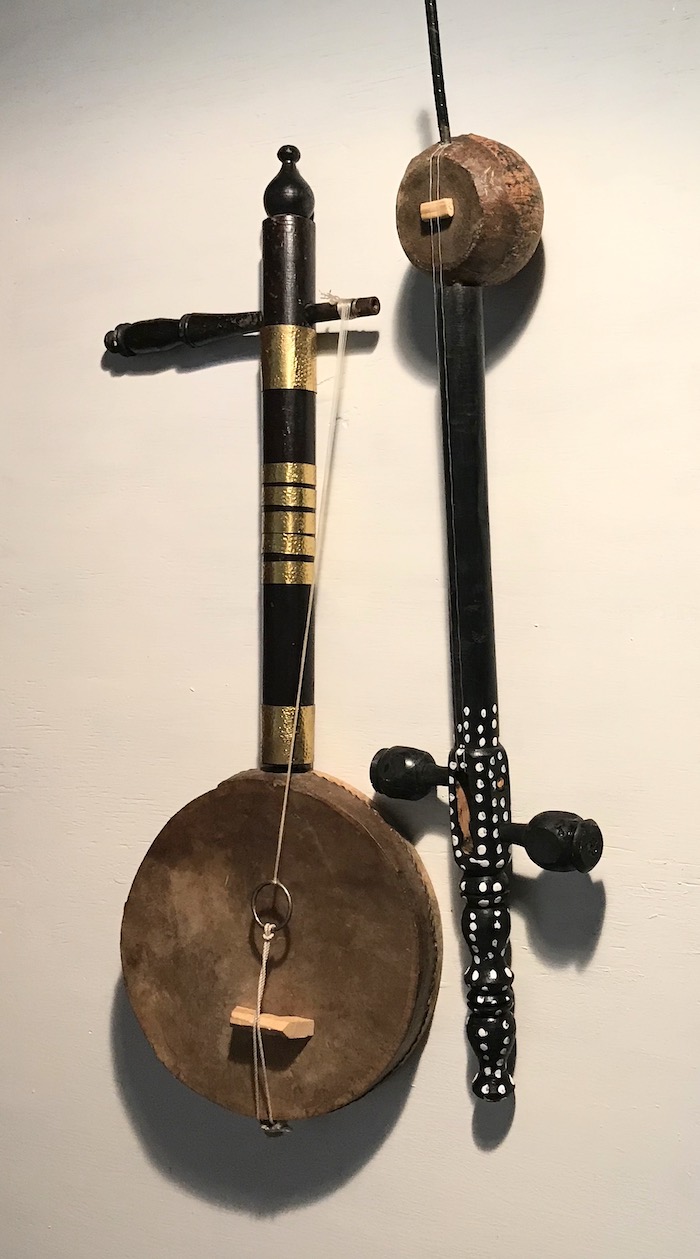 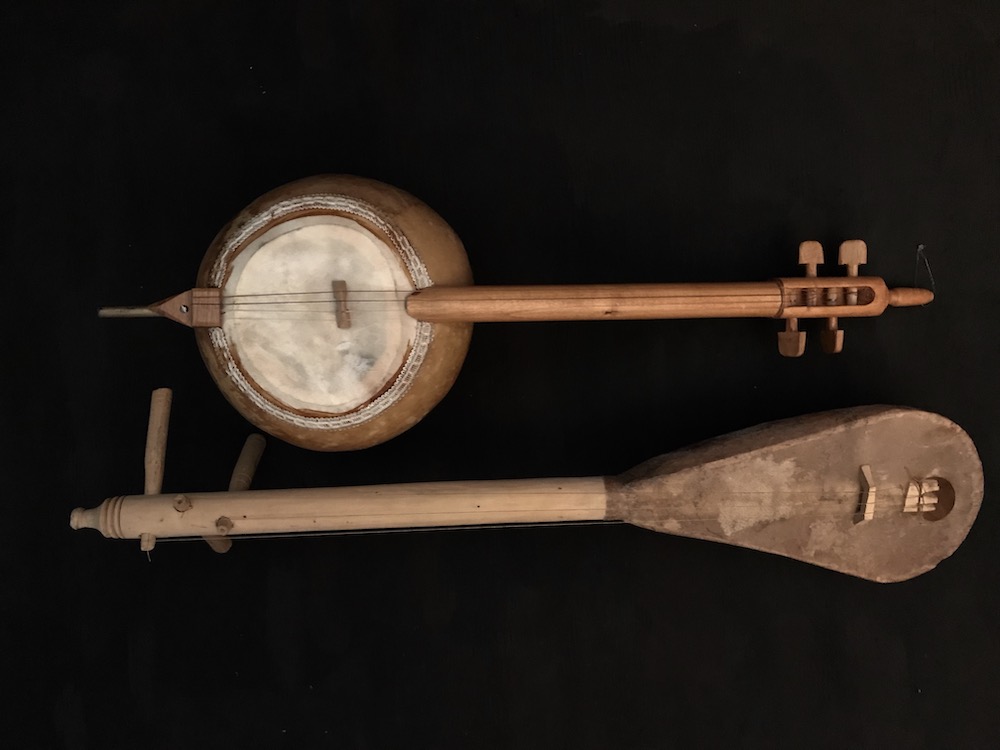 The Turkish Kabak and The Moroccan Guibri or Lotar. Depending on cultural and nationalistic claims, the Turkish Kabak can also be considered part of the Persian Kemancheh line 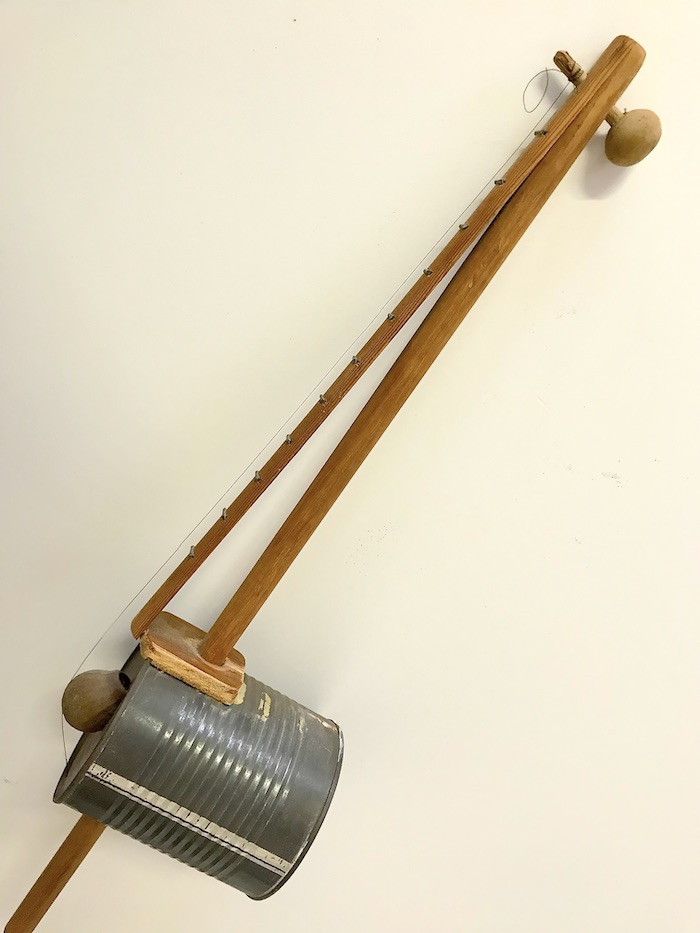 The Australian Tinolin. The tin has turned black with time, but the sound remains. 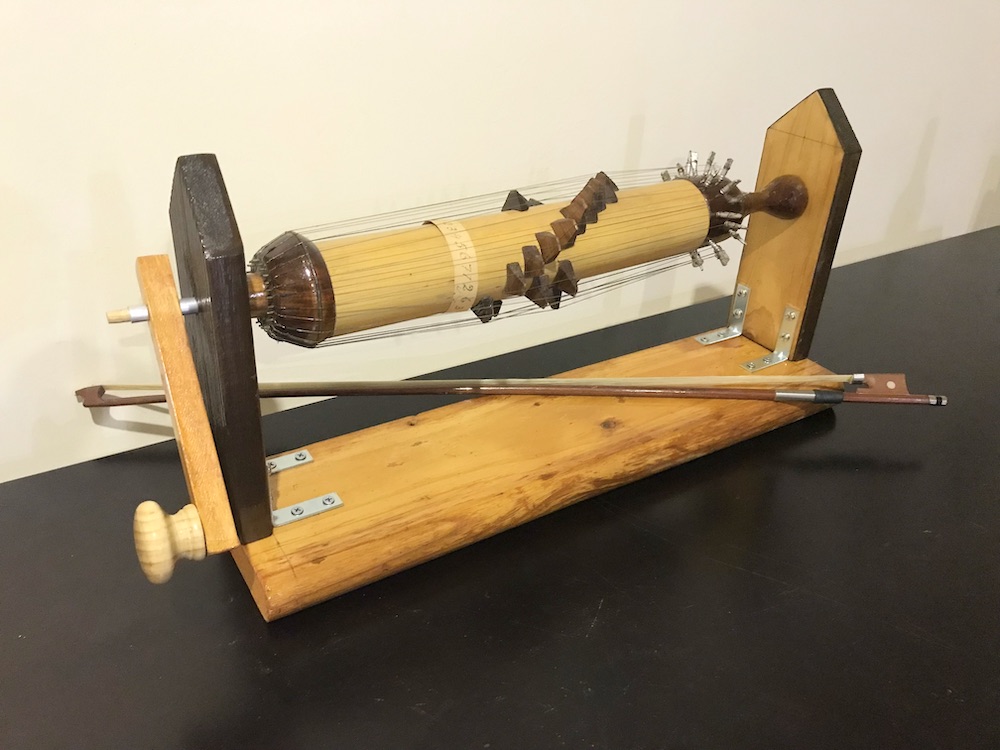 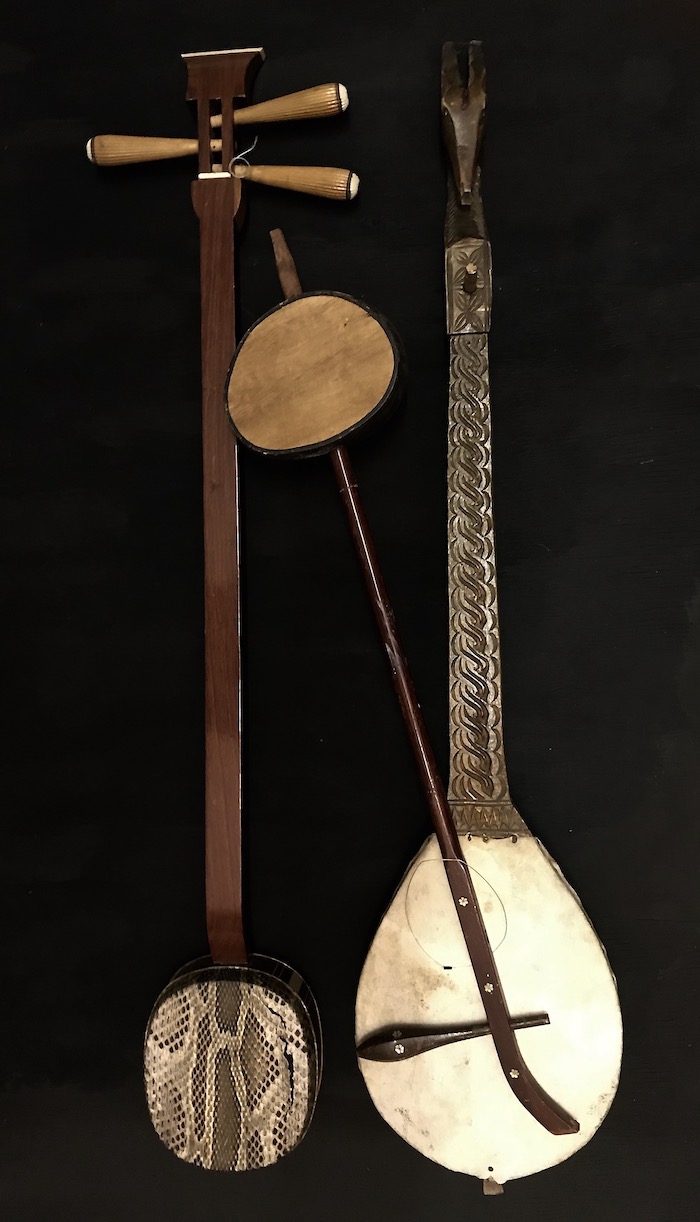 A Chinese Er-Hu and a Sanxian, plus another Balkan Horse Head Fiddle (all stringless)